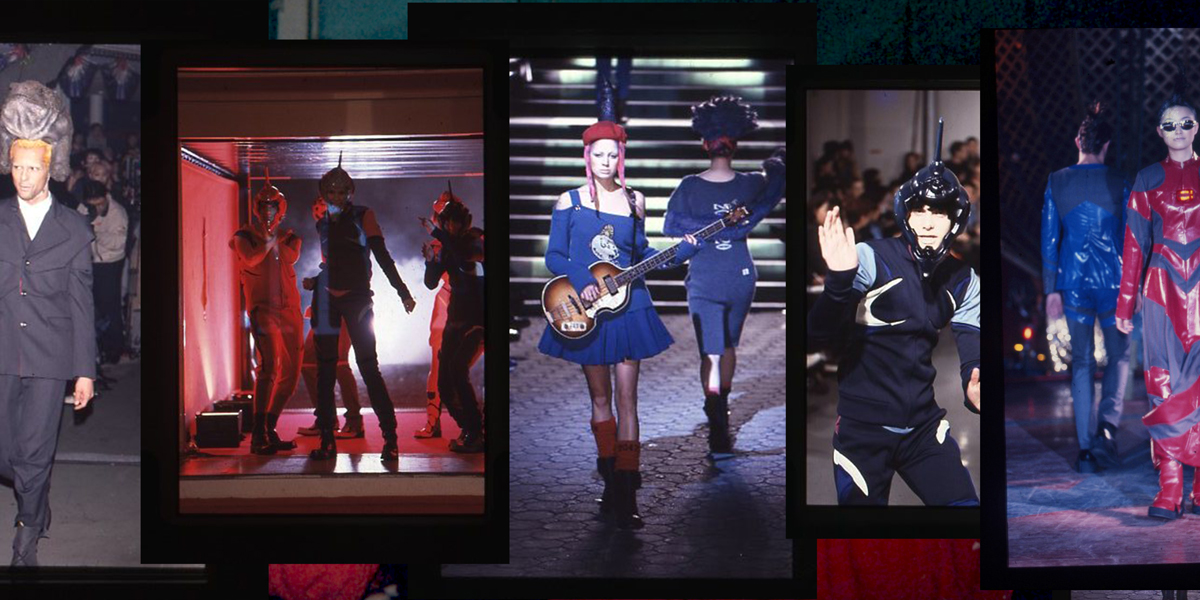 Where to Shop: 90s edition

Don’t we all wonder what the 90s in Harajuku was like? Let’s take a trip down memory lane and go through eight iconic brands that were all the rage in 1990s Harajuku!

For avant-garde and cyber clothing enthusiasts, 20471120 should be at the top of your list. The brand’s non-conforming clothing was a love letter to a future of diversity, individuality, and creativity, a future that the youth strongly resonated with. Take a look at their 1999 F/W collection and 1996 collection presented in Osaka. Models wore spiky hairdos, Dune inspired ski boots and unconventionally tailored suits. Masahiro Nakagawa, the designer of 20471120, explained that the name of the brand comes from one of his dreams. He said that on November 20th of 2047, he wants as many people gathered together in one place to say, “Cheers!” and celebrate the life that they’ve lived. So mark your calendars folks! 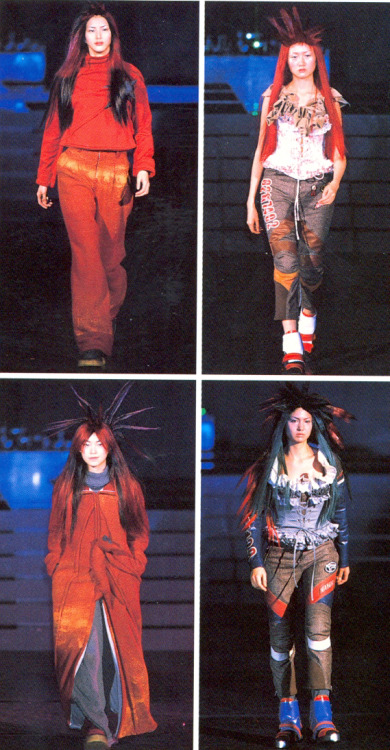 Image courtesy of high-tech-low-fashion via Tumblr

Designed by Takao Yamashita, beauty:beast grew extremely popular for its avant-garde approach to design. The name was inspired by the folklore tale of Beauty and The Beast and was meant to reflect humanity’s inner beauty and dichotomy; how we could all be beasts with a beautiful heart. Drawing heavy inspiration from the punk movement and black and white movies, beauty:beast’s clothes were known for the gothic contemporary t-shirts, blouses, and accessories accented with quotes related to religion or fairy tales. 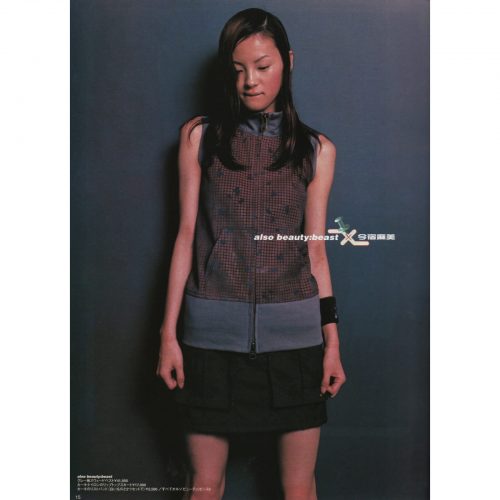 Founding member of the Antwerp Six (not the Sinister Six!) Walter Van Beirendonck, is one of the designers known to have revolutionised menswear. Through his independent brand W&LT, the designer deconstructed the strict confines of menswear with his distinctive use of prints, materials, and colours. Take a look at his 1997 summer collection, models wore black masks that resembled Daft Punk and pounded the Parisian pavement in BDSM-esque clothing. The brand’s colour palette and fabric choices coincided with the rise of cyber style. His vibrant pieces resonated with the Harajuku youth, who were always ready to add a little more colour to their style. Walter was an early adopter of internet inspired style. He even created a virtual pet Puk Puk; a round blue creature from the planet Dork. Walter’s creations were unapologetically loud and full of energy, which struck a chord with 90s Harajuku. 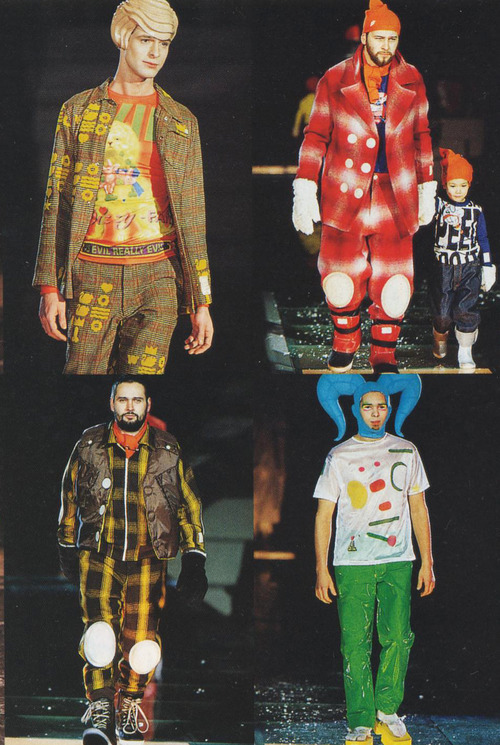 Image courtesy of ironpour via Tumblr

Hit tween-brand Angel Blue prominently rose to popularity thanks to the likes of Ai Kago and Nozomi Tsuji in the 90s. The idol duo were famous for often wearing the Angel Blue brand to their television performances and editorial shoots. Vivid colours such as cyan blue, hot pink, and sunflower yellow were the brand’s signature. These colours were seen in all of the brand’s apparel and accessories, and even their mascot Nakamura-kun. The brand’s energetic charm and flamboyant use of colours quickly won over the hearts of Harajuku youth at the time. Angel Blue’s clothes collided with the upbeat 90s spirit, it was a true match made in heaven. 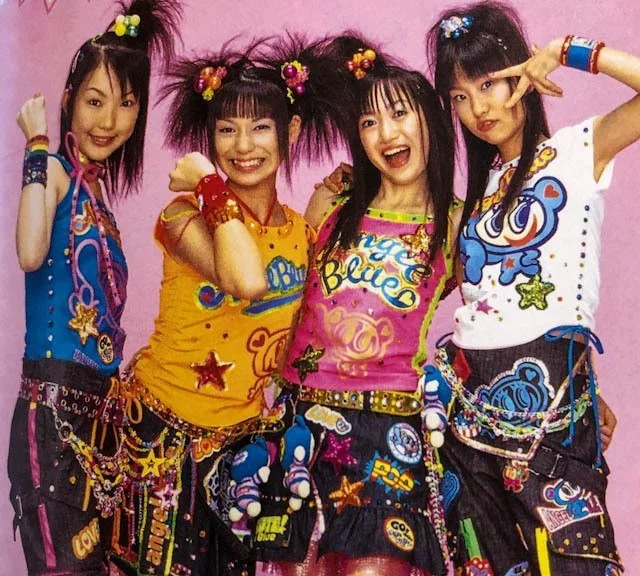 Image courtesy of nekuracharo via Note

Fashion pioneer Takuya Sawada started his brand Takuya Angel in 1995, not long after Kobe was struck by an earthquake. At the time, Japanese fashion was profoundly influenced by the trends from the West, and Takuya himself wanted to bring Japan’s rich culture to the mainstream spotlight. Inspired by kimono and clothes worn by the samurai, Takuya successfully blended ancient clothes from the Jomon era with the modern times. He even mixed British suit design with Kabuki, and Heian aristocratic art. His striking creations are so beloved by the Japanese street fashion lovers that he even had his own community called Angelers! 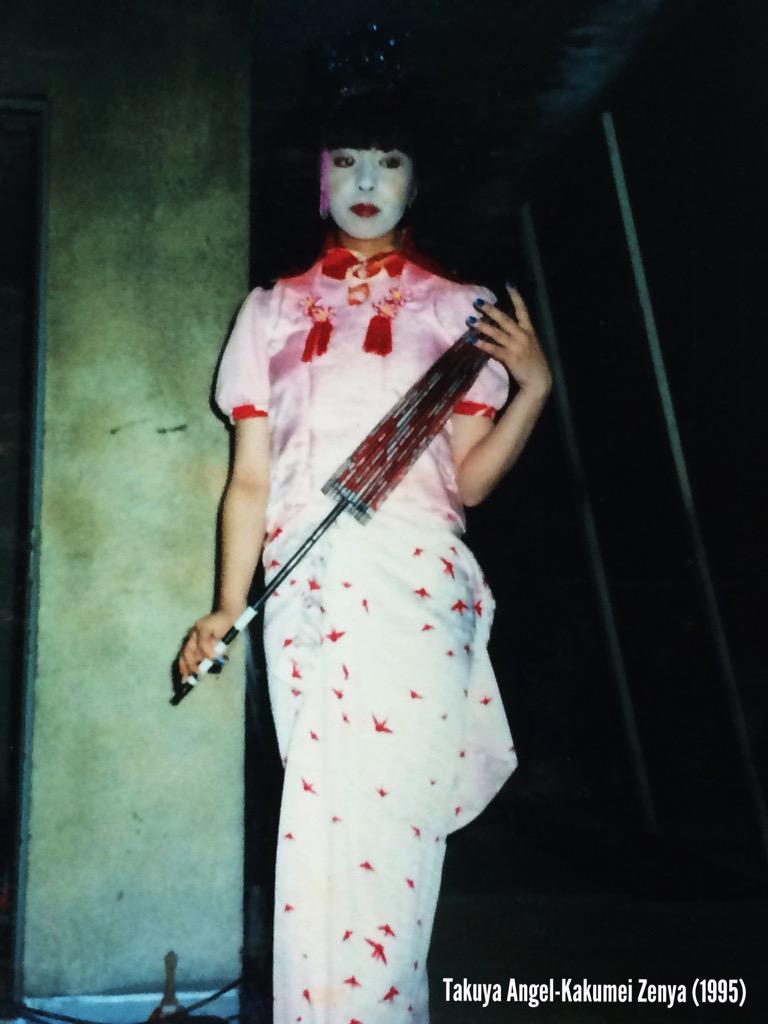 Founded in 1988 by Akinori and Fumiyo Isobe, Baby, The Stars Shine Bright is every Old-school Lolita’s favourite label. Widely known as the brand that established Lolita style in the 1990s, the label takes note from Victorian era attire and French Rococo. Each piece is adorned with ribbons, lace, ruffles, and frill detailing as its finishing touch, making the wearer feel like a fairy tale royalty. As for its primary colour palette, think toned down and pastel hues like white, blue (sax) and pink! 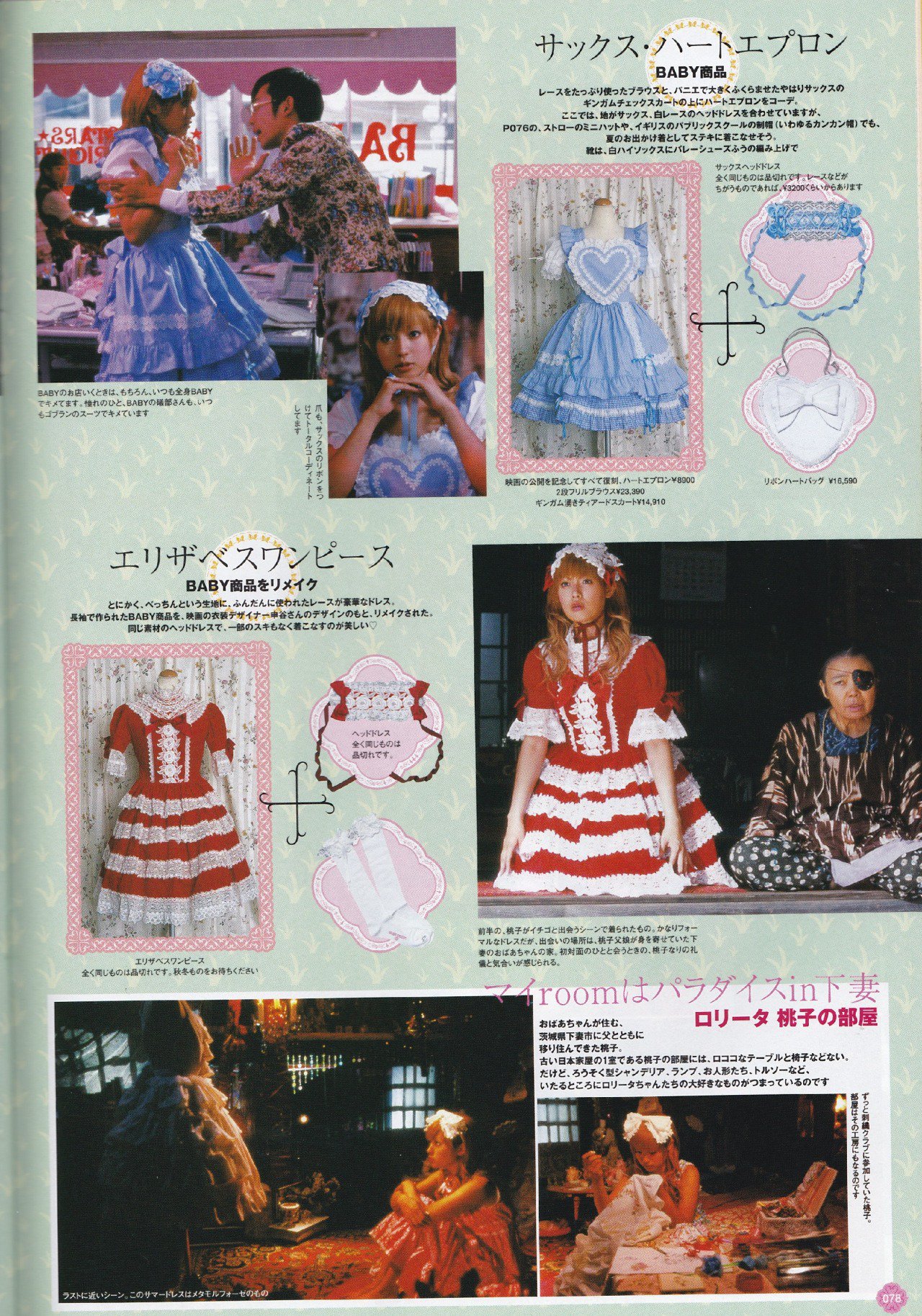 Known as SeKuDai by its devotees, Ayako Shiratama’s Sexy Dynamite London was pretty and punk! Paying homage to Vivienne Westwood and Old Hollywood starlet Marilyn Monroe, the brand was initially famous for being a UK select shop, selling Mod suits, and remaking classic British biker clothing like Lewis Leathers. After Ayako started creating more clothing for Japanese artists, she switched gears and created original pieces for Sexy Dynamite London.The brand was a cult hit and quickly rose to popularity, particularly for the Visual Kei enthusiasts, thanks to being worn by top Japanese rock artists such as GLAY and SMAP. 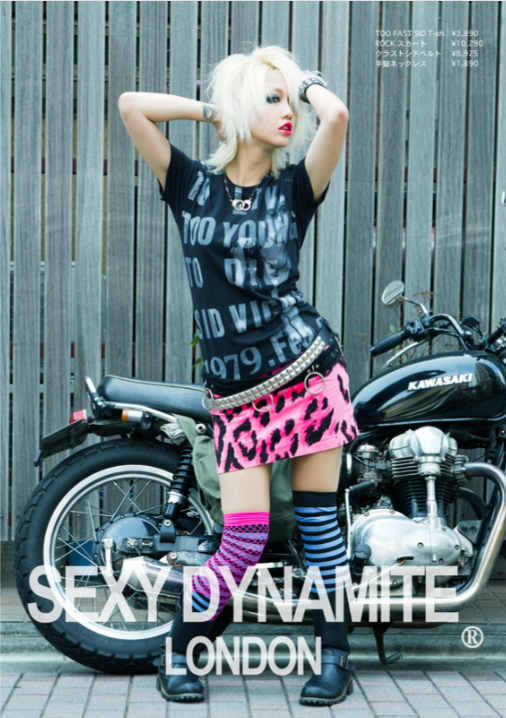 Image courtesy of ayako-shiratama via Ameblo

CoCoLuLu first emerged in the Harajuku fashion scene in 1998. It took inspiration from American casual style, for example loose fitting bomber jackets or letter man jackets with oversized shirts, sweaters, and jeans. Pieces that were both comfortable yet flashy! CoCoLuLu was big on bold logomania, also a staple of the 1990s. A typical pair of jeans or miniskirt would have the CoCoLuLu logo emblazoned on the back pocket, a style called “Ketsururu”. CoCoLuLu became increasingly famous amongst the gyaru community, particularly among the subculture style of the amekaji gyaru who often wore the brand’s staples. 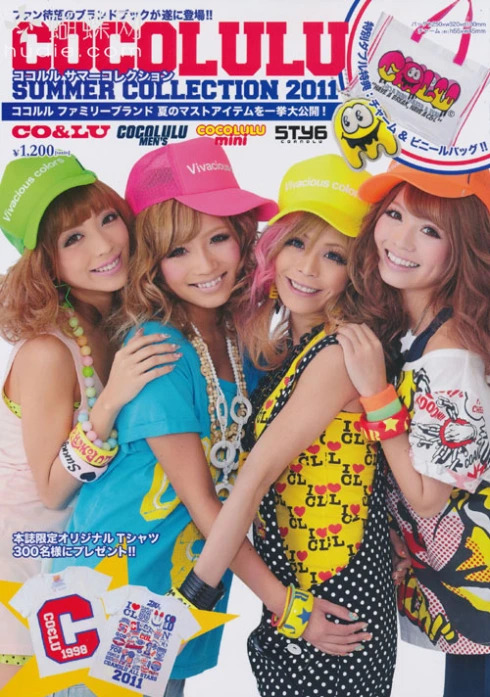 Image courtesy of youryoutopia via WordPress

Which one is your favourite 90s brand? Tell us in the comments!