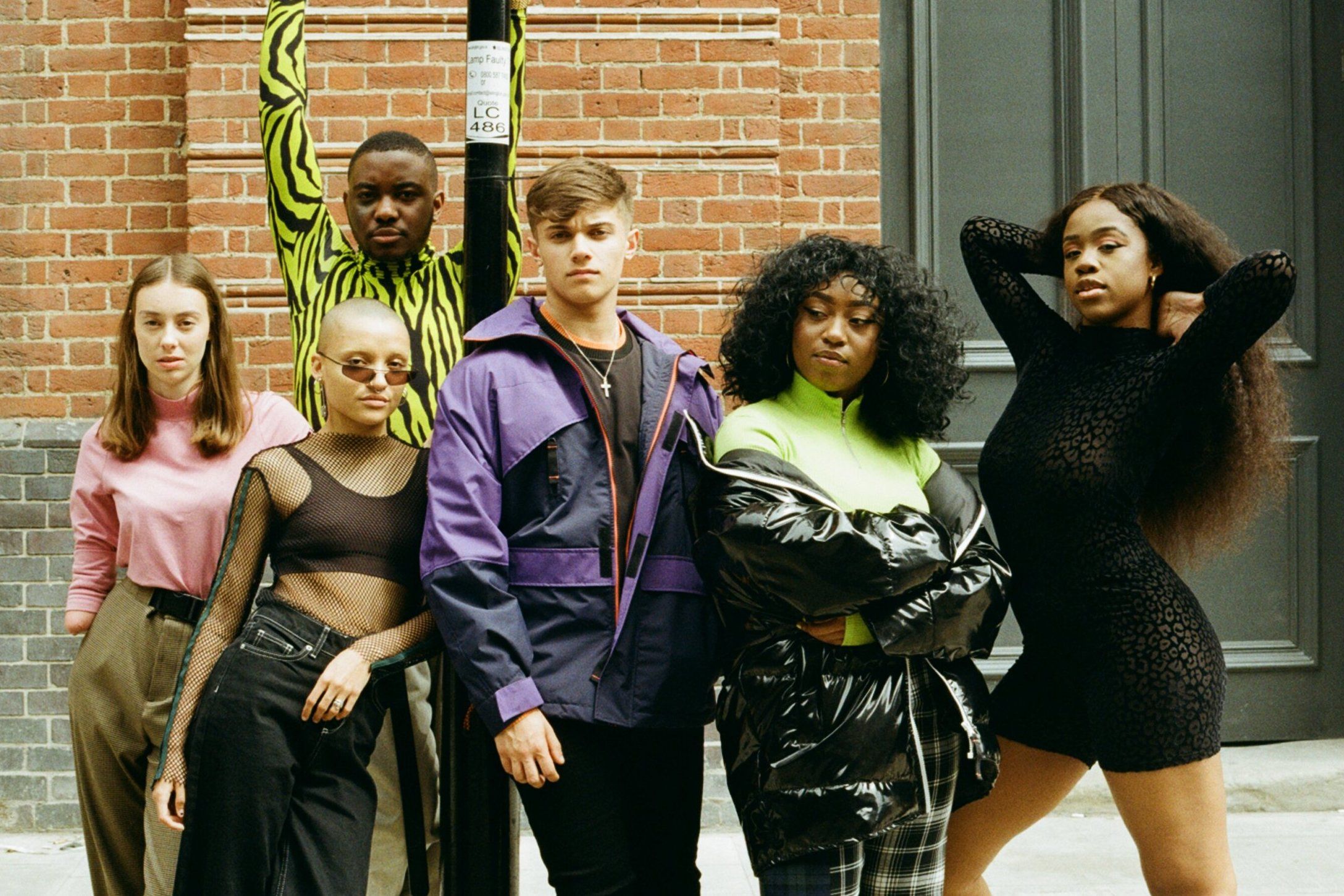 Shimokitazawa. 12pm. The air is chill and the place moreso. But that’s just Shimokitazawa—hipster heaven. You take a right, then a left, then a right again and you end up… lost. But who could care less when you’re sure to stumble upon a gem? Framed by imitation redbrick and sensible shrubs, look out for the red, white, and blue neon signage of the bathhouse-come-thrift store. Welcome to New York Joe Exchange, where Gen Z is taking an open-minded approach to fashion.

One, two, three steps down to the wide-open double doors of New York Joe: your path is lined with black bin bags brimming with new (old) stock. Walk past the till but don’t look up. The floor, surprisingly enough, is one of the most interesting features in this thrift store. Chipped white square tiles with cement grey grout—they’ve seen better years. A little further and you’re walled in by a ring of navy blue tiles—the men’s section of the old bathhouse. To the right, the red-ringed women’s section. Here you find the mainstage, a platform where time and space are compressed, collapsed, and deconstructed. In its wake: fluidity. Each new black bag is filled with a cornucopia of clothes that span generations. At first it may just seem like a mish-mash of… stuff—chockablock with clashing prints and contradicting silhouettes—but when viewed through a more inclusive lens, the thrift store becomes a perfect mirror of the fluidity of Gen Z.

Gen Z are a highly debated demographic that have received less than favourable rhetoric in recent years.

The term Generation Z (Gen Z) refers to people born between the mid-1990s and early 2000s. They succeed Millennials (aka Gen Y) and precede Generation Alpha, the children of Millennials. Gen Z are a highly debated demographic that have received less than favourable rhetoric in recent years. Sometimes known by the pejorative moniker “Snowflake”, media coverage of Gen Z—particularly in the UK—depicts them as overly emotional, having an unjustified sense of entitlement, and obsessed with their perceived “uniqueness”. But perhaps this is more a reflection of society’s tendency to criticise the generation to come-of-age—Millennials were not too long ago branded “narcissistic” by the likes of Jean Twenge. Whatever your opinion, there’s no denying the dynamism of Gen Z—Xiuhtezcatl Martinez, Emma González, and Kai-Isaiah Jamal, to name but a few. But what does it really mean to be Gen Z?

In the age of the internet we can enjoy a Harajuku fashion walk or attend a job interview with an employer 6,000 miles away from the comfort of our own homes. Thanks to technology, the barriers like distance and time that existed between people and places have become far less tangible. The result is a feeling that time and space have become compressed, that time and space have lost the significance they once had—Gen Z has come-of-age under these conditions. Many say that this is why Gen Z prefer shorter time-frames at best, or have the attention span of a fly at worst. But others think that Gen Z’s preference for transparency and economy of speech is just that: a preference.

A fluid thinker accepts that people are always changing, and embraces individuality and multiplicity over conformity.

But what if we were to take that thought a little further. Maybe this Gen Z “preference” is really just a way to process complexity. Technology has also flooded the world with an insane amount of information which we consume through the internet via Facebook, Youtube, and Twitter. The world is intense! And the information blitz we experience on a daily basis can be daunting to say the least—it’s only human nature to try to come up with a method for processing it. It’s also only human nature to go for the simplest option, but Gen Z are taking a different approach—fluidity. Fluidity is a way of thinking that encourages the constant negotiation and juggling of multiple concepts1. A fluid thinker accepts contradictions and doesn’t try to make them fit an ideal. A fluid thinker accepts that people are always changing, and embraces individuality and multiplicity over conformity. For Gen Z, fluidity is the default mode that helps them make sense of the world. The result is the redefinition of… well… everything! Gen Z have the ability to welcome multiplicity with open arms, and that means that they also have the ability to understand potential as something that is recyclable: Why can’t I be a musician and then an actor or a graphic designer? Better yet, why can’t I do all of the above? At the same time? Yes, this sounds eerily similar to the Millennial Side Hustle, but that was a financially motivated reaction to the 2008 crash. For Gen Z, multiplicity is the norm—they can’t imagine a world where they are restricted to one job for their entire lives.

Growing up as the debate around climate change has intensified, Gen Z has assumed from a young age that they are meant to make the world better. But according to Molly Logan, co-founder of Irregular Labs, a think tank dedicated to documenting the ever-changing social landscape from the Gen Z perspective, Gen Z is also almost nihilistic in their perception of life as a fleeting existence. The result? A dogged pursuit of solutions. When it comes to fashion and a human-made problem like climate change, the answer is simple: opt for the least environmentally harmful means of self-expression. Why go for fast fashion when you can have thrifting? Fashion, for Gen Z, means looking cool, being genuine, and having convenience but in a socially responsible way. It’s little wonder that thrifting is a more-than-viable option in this climate-change era because it allows clothing to be timeless but time-specific, wearable but repurposable, fashion-conscious but fashion-aware.

But the concepts of Gen Z and fluidity are very Western ideas. It would be short-sighted to read this article as some universal truth—but, this doesn’t mean that these world views are unique. Fans of Terrace House will recall the “Tempura Incident” between house residents Shōhei and Haruka. Shōhei’s desire to be a master of all trades was met with negativity. It’s true that a flexible understanding of one’s potential is not as widespread in Japan as the West, but there are examples of the above-mentioned Gen Z characteristics at work here in Tokyo. Enter (again): New York Joe. You walk into a shop like this not just for the fashion but also for an experience that is both honest and fluid.

To the left and right of you, scaffolding rails filled to the max. First, a giraffe-print puffer, then a graphic 80s shell jacket. Next, a tartan hunting coat, followed by that thrift store faithful: the denim jacket. Look up to find a Kurt Cobain-inspired 90s grunge tee, or a knock-off Versace Barocco silk shirt. In the thrift store, you find the same distortion of space and time, the same fluidity that Gen Z thrive in! What else explains the ability for designer and knock-off, Studio 54 disco chic and Kate Moss heroin chic to sit side-by-side?

Think of it this way: New York Joe has the same origin story as Gen Z. It is a place subjected to the compression of space and time thanks to a steady flow of vintage pieces from all decades. The cycling of black bin-bagged stock parallels Gen Z’s constant negotiation and juggling of multiple concepts, contradictions, and potentials. And New York Joe’s bathhouse-come-shop floor offers straightforwardness and authenticity a lot like Gen Z’s preference for transparency. The strength of Gen Z lies in their refusal to categorise or classify, and their ability to accept seemingly disparate things at face value. The thrift store is much the same and it is these commonalities that resonate with Gen Z. So yes, Gen Z thrift because it’s a great alternative to fast fashion. But keep in mind that they also thrift because they share an affinity with the thrift store: fluidity.

You walk back towards the till. On the way, display cases full of gold jewellery, snakeskin designer bags… a velvet toque. The shop staff thanks you for coming as you take those three steps up and out of the shop—you haven’t bought a single thing. It’s 2:10pm. You‘ve lost two hours and ten minutes—but it was worth it.