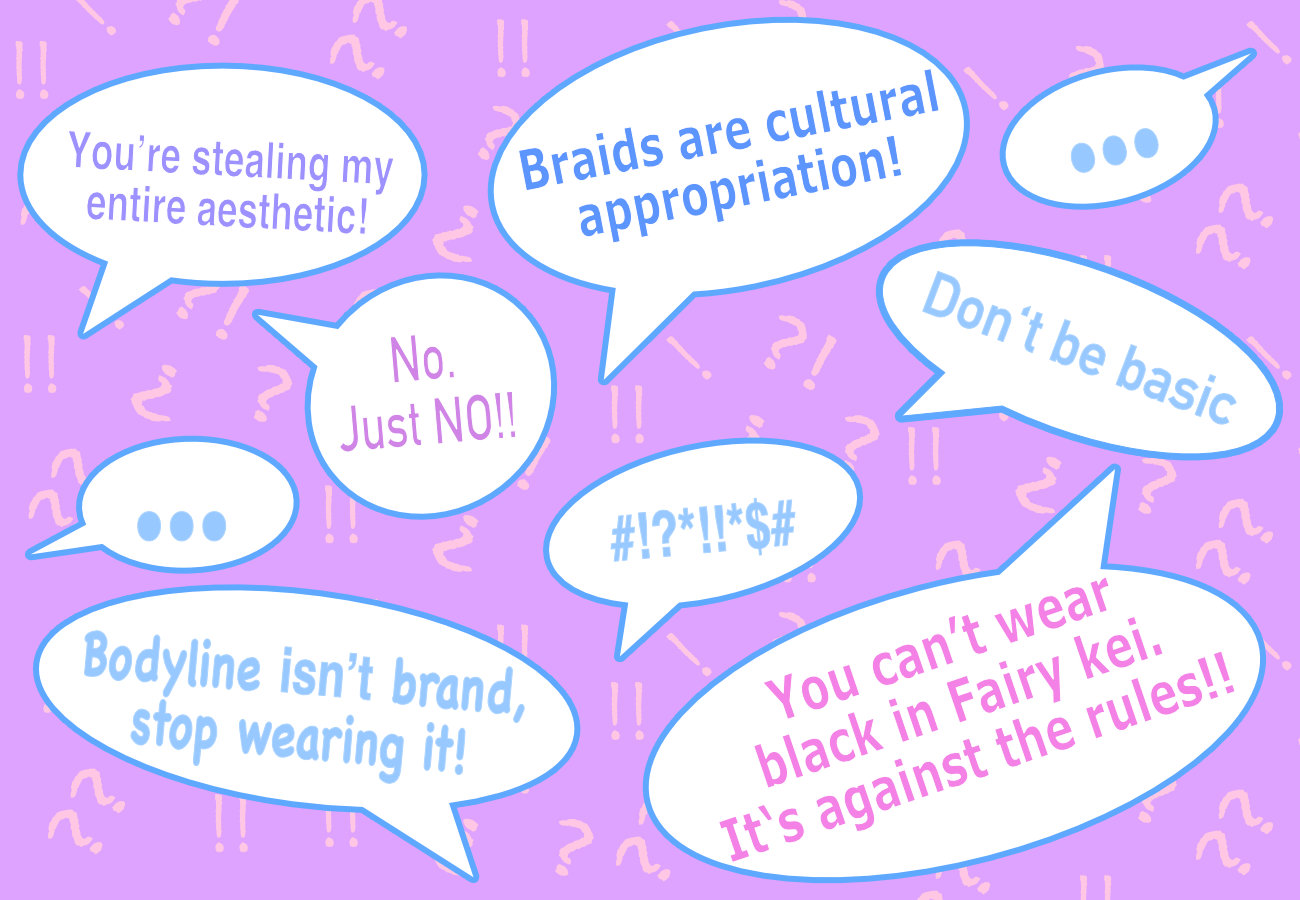 From LiveJournal to Instagram, the alternative fashion community has always embraced online spaces. Knowing that our style choices were not always welcomed in the real world, we encouraged positivity and openness in these spaces. Posting our coordinates on image boards like CGL, talking on Facebook, and sharing posts on Twitter brought this global fashion community closer together. But there were times when our posts and comments didn’t always align with the community’s ideals. When that happened, we moved to mediate by dispensing advice. But did we always go about it in the right way? Should we have called people out, or given constructive criticism?

Criticism isn’t inherently negative—it seems to be part and parcel in the age of social media. You’ve probably experienced it before: you post a co-ord on a Japanese street fashion forum, and someone inevitably comments with styling advice. While you may not have asked for their opinion, you weren’t hurt by it either and they gave you a different perspective. Constructive criticism provides feedback that encourages improvement. Youtuber Tyler Willis uses satire in her series Last Week Lolita News to discuss the difficult topics that arise within our community. In a video titled “Your Replica is Bad and You Should Feel Bad”, Tyler talks about a Facebook user who was upset about the community’s open criticism of her replica dresses. Tyler not only dismantles the user’s arguments in a constructive way but goes on to make a very strong case against buying replica dresses.

But that’s not to say that we have never had any negative spaces on the Internet. Community members were regularly slammed for their behaviour or “unstylish” co-ords on gossip forums like Behind The Bows and Gyaru Secrets. Fast forward to today and “slamming” seems to be the norm.

Shouldn’t we have been able to separate the cause of the critique from the individual?

Kelly Eden probably didn’t expect the backlash she got for posting a video on her Youtube channel about mistakenly paying $1500 for an Angelic Pretty dress. She’d bought the dress in an Angelic Pretty store in Harajuku. Her bank called soon after querying a $1500 purchase. Realising that the dress wasn’t the $150 she’d originally thought, Kelly tried to get a refund—a big no-no in small Japanese boutiques. She managed to return the dress, much to the chagrin of the store owners. Yes, of course Kelly should’ve paid more attention to the price of the dress—all of the community agreed on that. But then the conversation quickly descended into body-shaming and trashing her lifestyle—a line was crossed. Shouldn’t we have been able to separate the cause of the critique from the individual?

Calling someone out online usually involves giving your opinion as well as providing “evidence” of the offender’s wrongdoing. Reuploaded deleted content and screenshots of conversations (both public and private) are all “acceptable” forms of evidence. Sometimes opinion overrides fact and it becomes difficult to discern the truth—meaning and intent don’t always translate in social media missives. Quite frankly, anyone can say anything about anyone else on the Internet and present it as “fact” so should we believe everything we read or watch on online? The loudest voice is not always the correct one.

Spanish cybergoth fanatic, Chaoko made a video titled, “Mis Copias” (My Copycats), calling out people for copying her style. Even though the video was in Spanish, it quickly spread throughout the international community and prompted call-out reprisals eventually leading to a full-blown community uprising. Of course no single person can lay claim to a style like Chaoko did, but what should’ve been a debate became a shouting match in which no real resolution was found. While she ultimately deleted the video from her YouTube channel, it was reuploaded by a different user. The intention of such an act can only be described as mean-spirited. Using a person’s deleted content as evidence against them creates a hostile and unforgiving environment in the community.

Constructive criticism allows space for discussion and openness—isn’t that what we came to the community for?

While constructive criticism encourages growth and improvement within the individual and the community, call-out culture has far-reaching detrimental effects on both. Call-outs rally the community and charges them with a single task: publicly shame the offender for their transgression en masse. Unfortunately, it engages the community in a way that constructive criticism can not—outrage incites people more than positivity. But who gets to decide when someone needs to be called-out? And why should the community be brought together by mutual indignation? Is it a necessary evil? Or do the effects of the drama outweigh the benefits? In such a tight-knit group, it can sometimes be challenging to find a way to move past perceived offences. Constructive criticism allows space for discussion and openness—isn’t that what we came to the community for?

DISCLAIMER: Before anyone decides to call us out for not covering certain topics, just know that we have a word count! The conversation about constructive criticism and call-out culture is dense and nuanced. While we can not dive as deeply into the topic as we’d like, we hope this article is enough to get the conversation going.