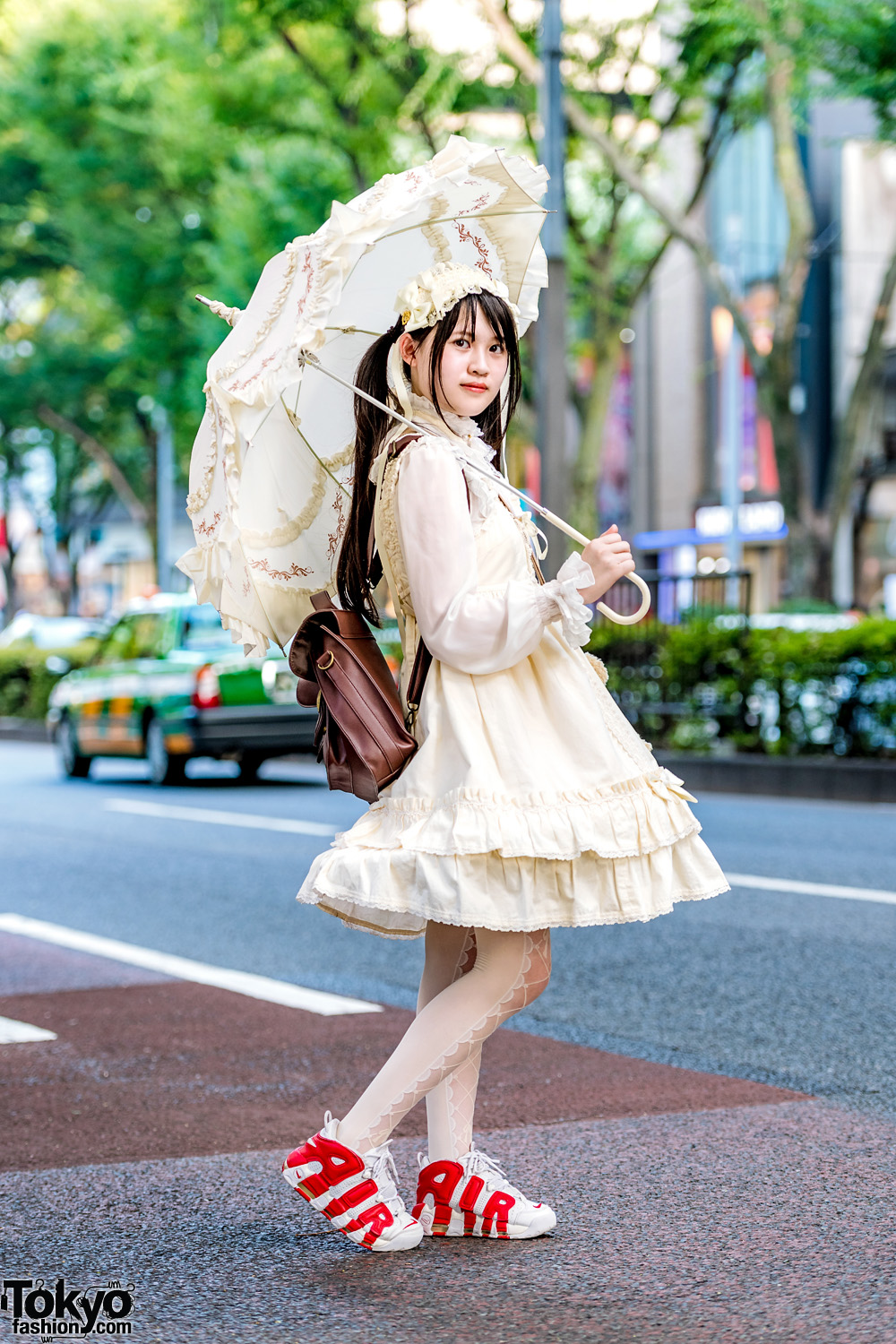 In the summer of 2018, a 17-year-old student named Hanegi dressed in Lolita fashion brand Baby, The Stars Shine Bright and instantly made waves on Instagram. Why? Because she paired the Lolita outfit with a pair of red and white Nike More Uptempo Scottie Pippen trainers. The pairing was in high dispute—everyone was either fervently against it or fully for it.

Lolita Fashion isn’t especially known for its casualness, and usually over-the-top coordinates include a pair of equally elaborate heels or pumps.

Many praised Hanegi for being so bold in her approach and putting an amazing twist on a fashion style that often comes with many rules—but others berated her for not following these exact rules.

It made me think, to what extent can we mix streetwear and typical Kawaii street fashion—two styles that are seemingly at the opposite ends of the fashion subculture spectrum? In this issue we have already seen a couple of ways in which these two can be mixed, but mostly The COMM has experimented with cute colours that are added on top of already streetwear-styled silhouettes. Can we really take a far-out fashion such as Lolita and mix it with something like Techwear, for example?

First we have to break down what sets the styles so radically apart. Think of streetwear and the image is usually stereotypically masculine, cool, dark, and minimalist. The Japanese street styles we usually cover are bright, elaborate, and stereotypically feminine. On paper these things seem like they do not match at all but when it comes to fashion, experimenting is key. Just as Hanegi did, we too should venture into other styles and take inspiration from them and bring it into our own fashion and styling. Doesn’t fashion need to be pushed in order to evolve?

The sociological aspect to footwear is also quite fascinating. In the book Sneakers: Fashion, Gender, and Subculture, author Yuniya Kawamura outlines the history of footwear with particular reference to sneakers (trainers). Different materials, heel heights, toe shapes, etc. convey formality, practicality, and even social status. This is just reflected in the outrage directed at Hanegi, which seemed to indicate that the type of shoe she was wearing was not appropriate for her outfit. It fell into the wrong end of the Kawaii fashion spectrum, which is accustomed to footwear that is impractical, elaborate, and in the case of Lolita Fashion, formal. Streetwear is all about the practical, casual, and informal. So for many, the shoes were a wrong choice not only aesthetically but stylistically, too.

I’ve always wanted to push the boundaries between fashion styles and I’ve made sure those featured on The COMM feel free to express themselves without fear of disapproval. I can totally sympathise with Hanegi who probably didn’t want to walk around Harajuku all day in uncomfortable heels and sacrificed “the rules” in favour of comfort.

We should be open to experimentation, and if it doesn’t work, well, at least you tried! In an alternative circle of fashion, it seems counterintuitive to set limits on someone’s style—kind of like a mainstream fashion mindset, right?

Was Hanegi’s trainer scandal a step in the right direction? Or one step too far? Should we be more open to combining streetwear with Kawaii fashion? What do you think?