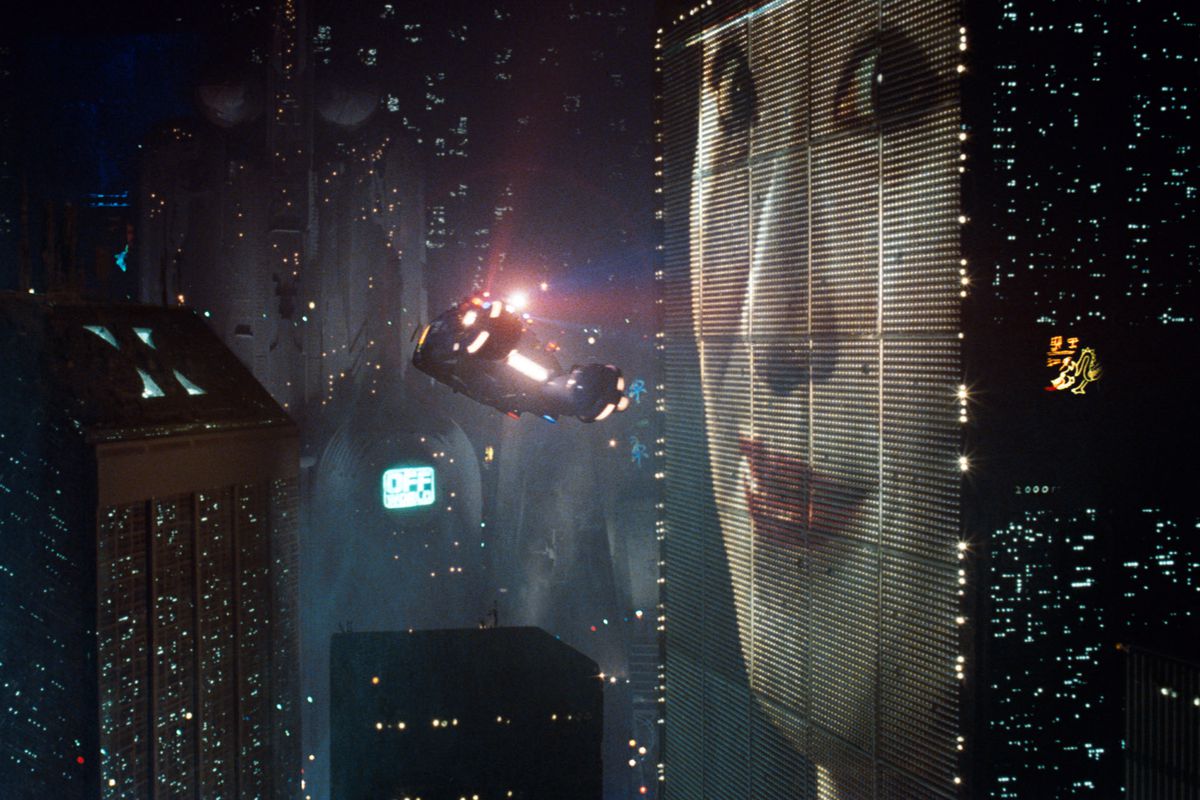 The Future is Asian

A city in perpetual shadow. Los Angeles 2019 is the setting, the camera pans over an endless expanse of skyscrapers. The vehicles of this future levitate, and so those skyscrapers have also become prime real estate for advertising. Plasma screen cladding displays a geisha, red-lipped, white faced, and effortlessly elegant. But wait! There’s a geisha in a science fiction film. In this world the artisans of old Japan have survived and retain their prestige.

The camera cuts to a street view of a decrepit water-drenched back alley. People are eating at a food stand and passersby carry umbrellas and kasa (another nod to Japan). Sitting down on an air duct is Decker (Harrison Ford). Lit by neon kanji and flickering TVs, he reads a newspaper. When it’s his turn the owner of the stand welcomes him with an “Irasshai!” (Japanese for “Welcome”). The stand, for all intents and purposes, seems to have been ripped right out of Tokyo circa 1982. The owner wears traditional garb, speaks Japanese and serves an array of noodle dishes with toppings.

Techno-Orientalism is the name for it. Blade Runner (1982) and The Matrix (1999) are just a couple of examples.

Watching the film through Western eyes, it seems so natural that the future would be Asian. There’s something about the East that makes the Western viewer think: new, advanced, technology. Whether this is true or not is up for debate, but the fact that the future in the Western imagination is often always tinged with hyper-technological Oriental qualities is not.

Techno-Orientalism is the name for it. Blade Runner (1982) and The Matrix (1999) are just a couple of examples. Japan became the face of techno-Orientalism in the 80s alongside the nation’s cyberpunk movement and dramatic economic boom. China was soon to follow in the 90s with its emergence as a newly industrialised country. Essentially, it’s a reflection of Western anxieties about the increasing supremacy of the East as a result of globalisation. The result is a struggle for cultural and economic hegemony. But how does this manifest in films?

Demolition Man (1993) is an action film starring Sylvester Stallone. While serving a lengthy prison sentence, former police officer Stallone is revived in the year 2032 to capture an evil crime lord. The city of Los Angeles has been renamed and rebranded and is now a beacon of civilisation. The enlightened elite are architectural, elegant and quintessentially Japanese in kimonos of black, navy, and grey. But the Japanese influence doesn’t end there. Their apartments are minimalist, open spaces of clean straight lines, and rooms are separated by shoji screens.

But alongside this sophistication and cultivation is the underworld. Literally. There are a bunch of people living in the sewers, and let’s just say there’s not much room for opulent voluminous fabrics in a sewer. The people who live underneath the city are covered in several layers of dirt and while they too wear various shades of grey, you get the sense that their clothes were not always that colour.

In the end, the dirty sewer people win because apparently being free from communicable diseases like syphilis doesn’t beat the right to self-determination. 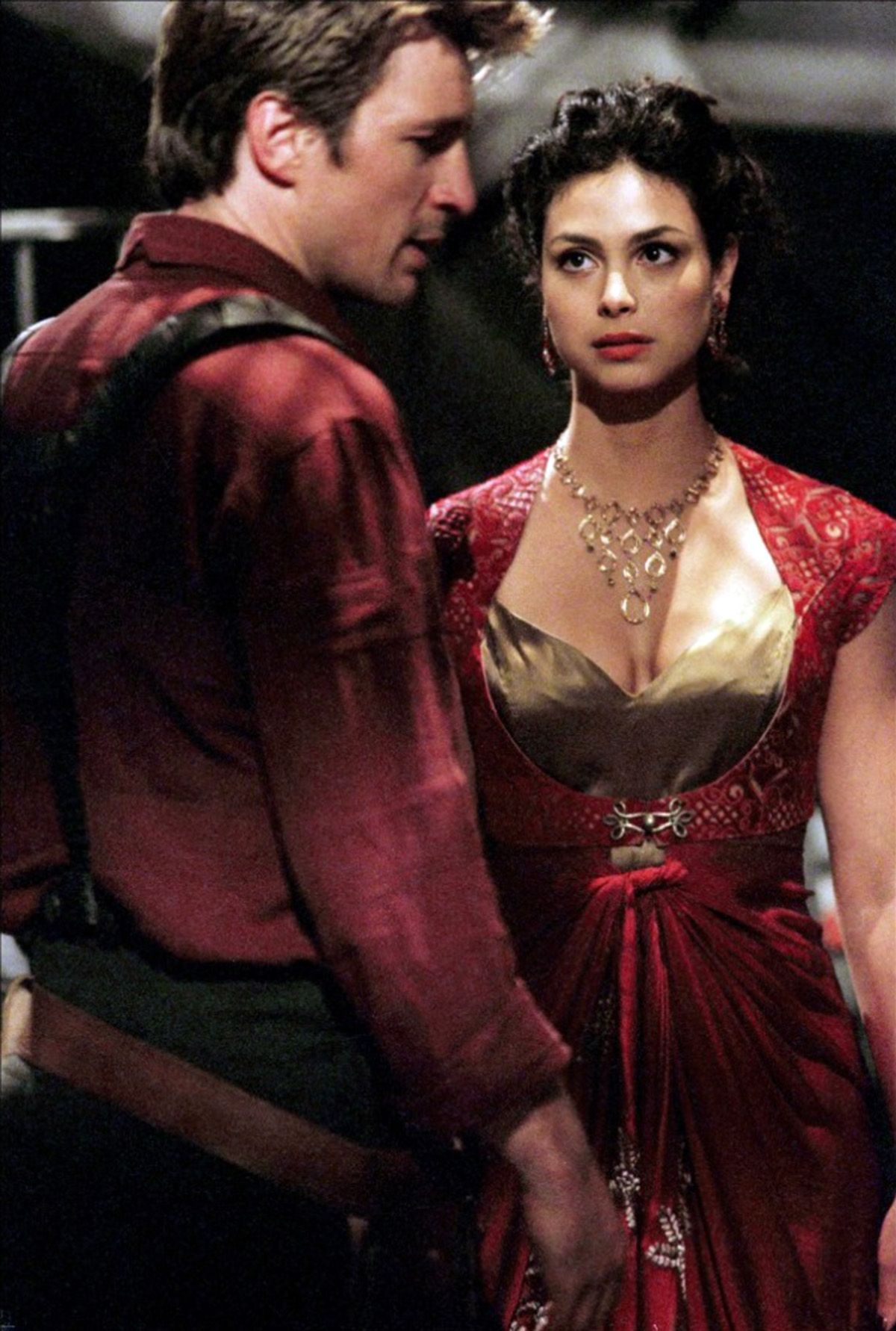 Before techno-Orientalism became a thing, there was Edward Said’s “Orientalism”. Cultural subjugation of the Orient (the Middle East) was used to elevate the West through the establishment of binary oppositions. The Orient was essentialized as static, mysterious, exotic, and irrational; while the West was mutable, knowable, familiar, and rational.

Joss Whedon’s Serenity (2005) is more along the lines of Edward Said’s concept of Orientalism. The human race has flown the nest, expanded out into the cosmos and colonised a lot of planets. The central planets make up the highly developed “Alliance”, while the outer planets are more like the American Wild West. Whedon’s vision of the future is chock-a-block with English-to-Mandarin code switching, cultural fusion and ambiguity, and Middle Eastern references. One of the main characters, played by Morena Baccarin, is taken straight out of the “How to be Oriental Handbook”. Surrounding herself with damasks, incense, and gossamer thin fineries, she epitomises the mysterious, exotic Orient.

The Orient doesn’t occupy its traditional role as “uncivilised”, but it does easily get portrayed as sinister and evil. It is an all-seeing, all-knowing agent of control and manipulation. And so the Wild West that was originally the home of lawlessness is reimagined as the home of freedom.

Do you see a theme here? The “Yeah, being advanced and civilised is great and all, but I’d rather be free” libertarian theme? Let’s move on!

In the film adaptation of David Mitchell’s Cloud Atlas, a fabricant named Sonmi 451 takes a course of action that will lead to revolution. The book as a whole is about how we prey on each other and the film is a pretty loyal interpretation of that. The story is set in Neo Seoul which seems to be the last bastion of civilisation. Sonmi is a fabricant and she works at Papa Song’s fast food restaurant. The long and short of it is that her life is not her own. She was engineered to live and die in servitude.

The interesting thing is that the ultimate form of a capitalist way of life, a corpocracy, is realised in South Korea. Why? Because it aligns with Western perceptions of consumerist Asia. South Korea’s ascension to the upper echelons of the world’s leading economies was set in motion by General Park in the 70s. Decades on and South Korea has its own unique brand of consumerism in which keeping up appearances overrules financial soundness. This hyper-consumerism is a major cog in the Korean economy and Cloud Atlas takes this concept several steps forward using Sonmi’s tale as a caution to all, and as a call to reject that way of life.

There is, throughout Hollywood’s renditions of the future, always an Asian element. It’s so normal many of us hardly notice it. But maybe you should start noticing it. Maybe you should watch your favourite science fiction films with a fresh perspective. And then let us know what you think.