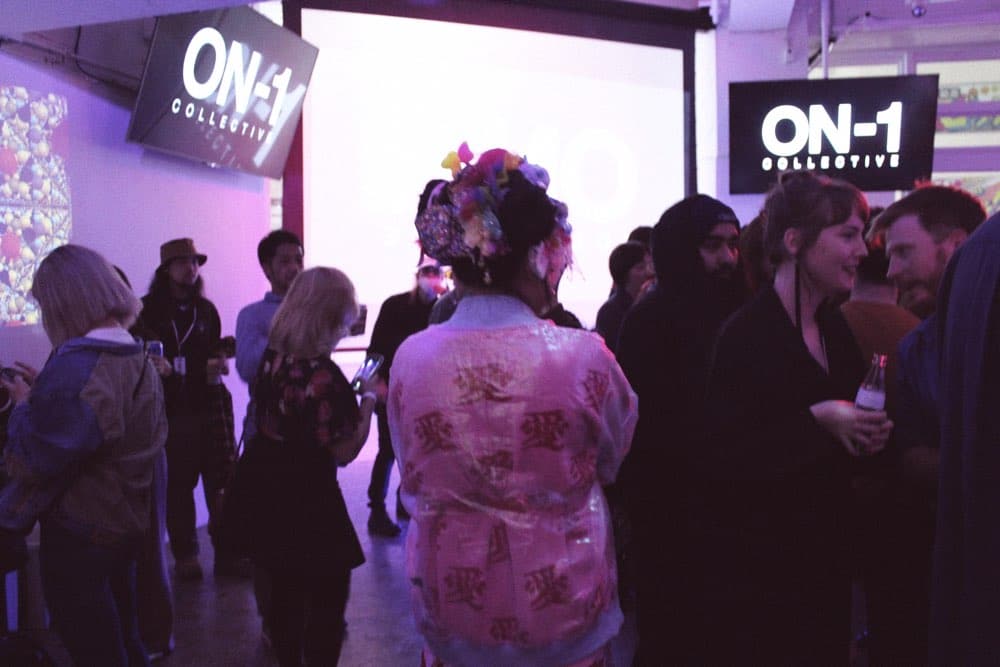 Silky kimono, neon latex, pastel velvet—everywhere I turn my senses are met with colour, texture, and sound. It’s like being a kid in a candy shop—if your candy of choice was aesthetics. Kawaii, retro, cyber, skater, punk—you name it, it’s here. You can really feel each person’s individual personality shine through their clothes. You hear a variety of music, all clever blends of different genres. You make your way through a sea of bright yellow locks, huge afros, and waist-length braids as neon lights flash vivid blue and pink. Tonight is when Tokyo’s fresh-faced creatives come together—to take over the world. Well, at least the art innovation world!

The COMM had their first event, a fashion walk, held by the ON-1 Collective at EDGEof Shibuya. This was ON-1’s 6th event for creatives to get together and showcase their work. EDGEof is right next to Tower Records (the biggest music shop in Tokyo!) and even if you somehow miss this massive yellow building, you know you’re in the right place if you see a girl dressed like she has covered a kimono in glue then rolled around in a Hello Kitty shop (this was one of The COMM’s models for the night, Chami!).

The night had coincided with Amazon Fashion Week and The COMM had the honour of bridging the gap between technology and fashion for ON-1. As people arrived, music collective dosing begun their set of chill hip hop.

Then it was time for The COMM’s fashion walk. The guests were asked to keep the runway area clear, but there was no divide between the runway and the audience. The lights lowered and the models began walking the runway to Dizzee Rascal’s Don’t Gas Me. Being up close and personal, we could see every detail of their outfits and the proximity made it feel very interactive. The COMM livestreamed the fashion walk for those who couldn’t attend on Instagram, while the models filmed themselves walking with a 360-degree camera attached to a selfie stick. This added to the audience participation, as we were included in their selfies!

The models were draped in different Tokyo styles which represented the themes featured in Volume 1 of The COMM. Wuma and Ichika were Cyber (bright neon everything), Chami was Kawaii Revolution (a baby pink skirt covered in the Powerpuff Girls), PYON was The Community (dark furs and animals prints), and Manon Marguerite and Anji of Salz Tokyo were Neo Trad (a bralet and skirt upcycled from used kimono and a modernised kimono, respectively). After all the models had walked, they came out together on the runway to strike a pose for us all. Instead of going backstage when the fashion walk ended, the models dispersed into the crowd.

After the fashion walk, 問題児 (Question Children) performed their unique blend of traditional Japanese and reggae. Next, Nanami Chinatsu entranced our senses while dancing covered in UV paint. Mami continued the visually stimulating theme of bright UV paint by decorating the wall with stunning calligraphy. After some imaginative art, it was time for us to mingle again while Ally Mobbs DJed, offering us ethereal hip-hop. The final performance came from Satellite Young who made us feel like we’d travelled back to Tokyo in the 80s (much Vaporwave aesthetic!). Check out our dedicated article here for more information on the other performers of the night!

The COMM did a perfect job of adding a pop of colour to the event—if you spotted some pink latex amongst the crowd of black, it was definitely one of their models! All the models looked effortlessly cool as they walked the runway and the show really gave you an idea of what The COMM stood for as a magazine: diversity in fashion, ideas, and technology. The show was a complete success and it was the talk of the event. Everyone was friendly and dancing with painted grins (and in some cases, painted bodies). All the acts were amazing and it was intriguing to look into the world of Tokyoite art and innovation. The event was an inspiring night with diverse and intimate company, which left us eager for the next one.