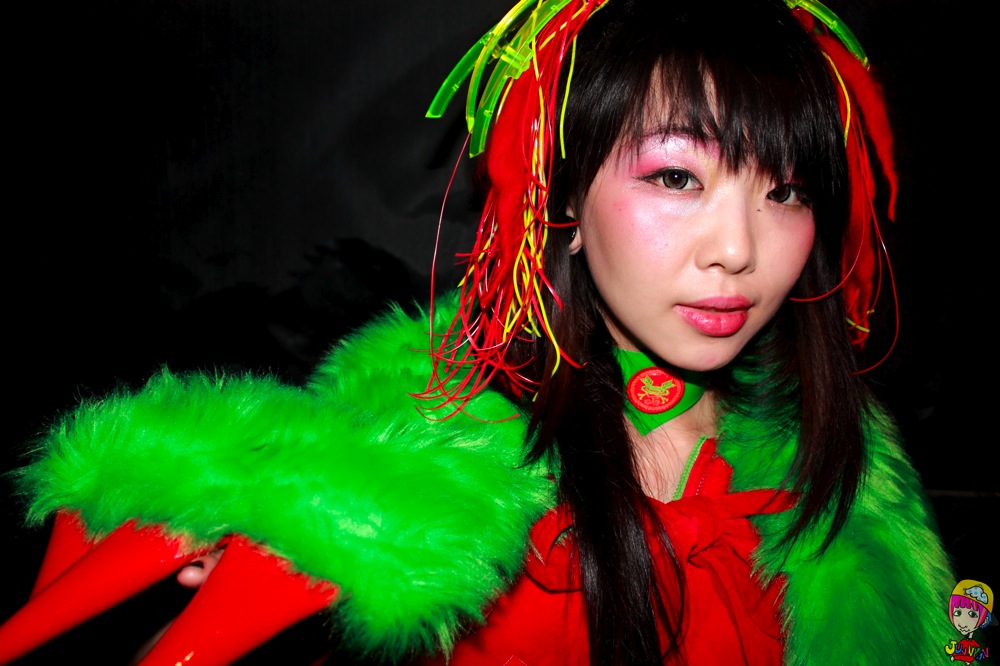 Takuya Angel: a bespoke fashion brand that combines traditional Japanese clothing with wild cyber accents as well as various other influences—a combination that is totally unusual and so makes for a really interesting outcome! The looks created are striking and instantly recognisable. Any piece from the collection will get you street snapped for sure! You can find the brand either online or at Artism Market in Tokyo. The designer, Takuya Sawada, has seen the fashion trends change over the years and has great insight into the street fashion world. Let’s hear his thoughts.

What do you think of current street fashion trends?

The economy isn’t doing well, and that’s being echoed in fashion. People are wearing dull colours and the same styles of clothing. Fashion is a reflection of the times. In this day and age, people are internalizing change and pushing it back out like water surging from a spring. This is occurring in conjunction with changes in the flow of society. Street fashion will see a dramatic change as it’s also subjected to these societal changes. Right now it’s at a standstill.

You are inspired by Heian aristocratic art, Kabuki, cyber, anime, Christian art and British suit design, to name but a few. How is that realised in your brand? What are your favourite motifs from your influences?

All in all, my inspirations are the anime I watched when I was a child and the works of art I have seen up till now. The fashion styles that I’ve worn are central when I take those inspirations and make them into clothes. If I’ve never worn a garment, I don’t understand what it means to wear it. And so any garment I make—without knowing what it feels like to wear—will never sell well.

Kabuki is an example of Edo period culture in which people paraded down streets in flamboyant outfits and it has remained unchanged. Words come and go with the times, but concepts are enduring. My designs also originate from words. I render a sketch of the image that comes to mind based on the associations I make with those words. And from that sketch, I make clothes. The shapes and colours I associate with words like Kabuki, cyber, anime, Christian art and British suits become drawings and clothes through my world of fantastical associations. People familiar with these genres will still be able to recognise them for what they are—regardless of my interpretations.

My next major theme will be nature, e.g. animals, insects, flowers, et cetera—works of art created by the gods.

Do you think your juxtaposition of old and new echoes Japan in general?

From the Meiji period onwards, Japan rejected the kimono and adopted Western-style clothing. I think this was the first major mistake we made, we should’ve merged the two instead of throwing one away. We still haven’t united the two, so I’ve started doing what should’ve been done.

Fashion magazines have repeatedly featured the same interpretations of western trends from the 1920s until now and regurgitated the same hackneyed topics. It’s been tedious. There have been many modes of Japanese fashion: from Jōmon to the Nara and Heian periods, the Sengoku period and the Edo and Meiji periods. None of the fashion magazines make any reference to the first three ages of Japanese fashion… it’s abnormal. I introduce these modes of fashion by incorporating their characteristics in my designs in order to broaden this strange and limited perspective of fashion that Japanese people have been given.

Osaka is great at rocking second-hand clothes. They’re open to new and fun fashion, even if they haven’t been featured in the magazines. Whereas, in Tokyo, a new style only emerges after it’s been featured. And so, Osaka has been at the forefront of the latest styles, while Tokyo has been following them.

The difference between Tokyo and Osaka street fashion can also be attributed to the fact that people from rural parts of Japan come to Tokyo looking for better opportunities and the city has a high turnover of people. The migration of people to the capital creates a situation where everyone’s trying to feel each other out—decide whether or not they can trust each other. While, Osaka is a place where it’s hard to the break bonds between the natives; people accept each other with open hearts. I think that Osaka encourages an environment where people can easily absorb new fashions.

Imagine 10 or 20 years into the future, where do you see your brand?

I’ll be 70 years old in 20 years so I’ll be sketching and designing, but I don’t think I’ll be cutting, sewing or making samples. Where will we be in 20 years?

“Fashion reflects the times. Takuya Angel contemplates the world that is yet to come and designs clothes that express that. So, we may be a bit ahead of the time, but when that time does comes, people will understand. Thank you very much.”