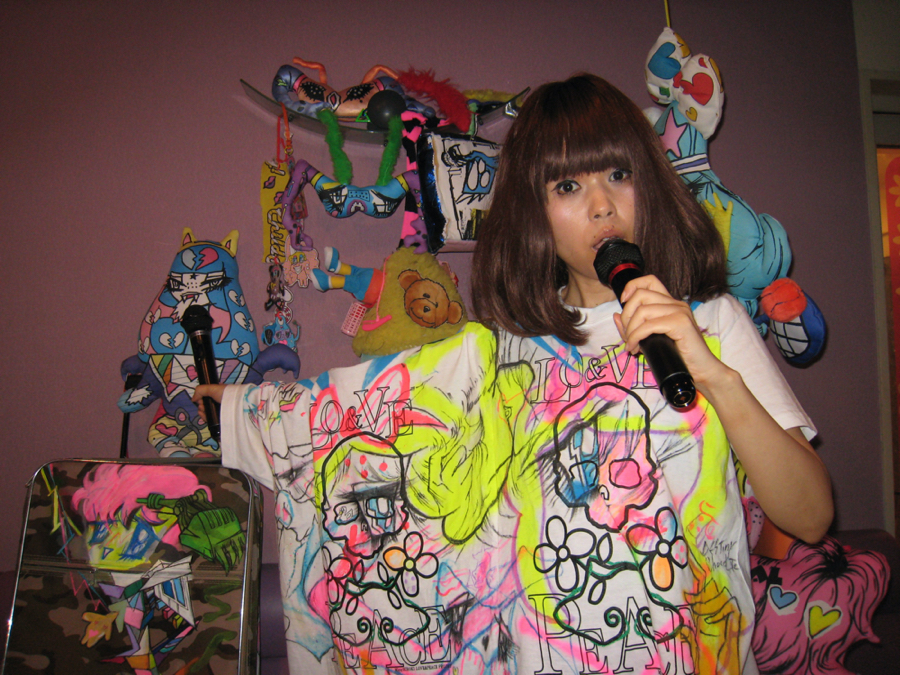 Wrapping up this issue is ShojonoTomo—an esteemed artist whose work aims to delve deeper into Japan’s difficulties with confronting affection and overcoming emotional trauma. How does this tie into Neo Trad, you’re wondering? She chooses to look back in order to move forward. To ShojonoTomo, the answer to modern day issues lie in traditional festivals such as Bon Odori and in our childhood memories. She recreates the festival atmosphere with a group of performers, each wearing brightly-coloured yukata. The feeling it creates is one of vitality and euphoria. The meaning behind her use of yukata adds another layer to her work—one which we hope will make you think about traditional clothing, its meaning, and how it could serve a greater purpose than being just a garment.

Your latest project YUKATA&MATSURI is about reviving the original purpose behind the Bon Odori—to revitalise sexuality in Japanese society. How can turning to the traditional address a modern problem? Why is this more effective than looking at the “now”?

Firstly, let me correct a little misunderstanding. The Bon Festival was originally a service for the dead. I’m not focussed on the festival in that respect, but rather when it was a place where men and women met—a place that was a catalyst for love—and the yukata they wore at the time. I’d heard that an increasing number of youths thought that modern Japanese people were “afraid of getting hurt”, and that it is easier to just not have relationships. I wanted to remind them of their libido by arranging modern festivals and making yukata. They say that performing the same dance in large groups releases a lot of endorphins which then produces a sense of euphoria. And there is a common mindset amongst Japanese people of not wanting to embarrass themselves by dancing in front of others. So, I thought they would find it easier to participate in the Bon dance—a traditional event with fixed routines.

Do you think this lack of affection is edging towards a “crisis”?

This lack of affection in relationships between men and women is featured in the YUKATA&MATSURI project, which is one of the projects being used to express SKINSHIP BURNY—a concept of my creation. I use the word SKINSHIP to refer to communication and tactile affinity between parent and child for the purpose of reaffirming affection. The lack thereof leads to harmful effects, which I depict as a scalding wound. This is called “adult children” (or “AC”) in specialised terminology. AC refers to the phenomenon where a person suffers from emotional trauma (even as an adult) due to being raised in a dysfunctional home. In recent years, it has clearly been demonstrated as an occurance in which you feel that you are unloved by your parents or that the type of affection you seek is not forthcoming. It also involves being made to feel responsible for family problems and battling with problems that make it difficult to carry on living. There is an increasing possibility that it is connected to bullying, suicide, young people not in employment or education, and the declining birth rate. And so, we are now looking to understand and treat it. A lack of affection breeds a lack of affection. I believe that it is essential to recognise this link from the beginning.

Why do you think a sizeable number of Japanese people behave in the way you’ve described—without showing affection?

As I wrote earlier, I think that AC are easily created. Or more specifically, one now has the capacity to recognise that one is in fact an AC. Dysfunctional families and such problems are age-old issues. This is just my opinion so it doesn’t mean that there is evidence to support it, but in decades past they did not have the time to scrutinise their personal frailties because everyone dealt with common concerns and enemies (wars, poverty, and so forth). The majority of Japanese people believed in the virtues of the samurai spirit and the perseverance of the idealised Japanese woman. And so it seems that they internalised those virtues and didn’t deal with their own vulnerabilities.

In contrast, in our diversified modern society, there is freedom of thought, we can function without group action and cooperation, and we can even keep up appearances with SNS, emojis, and stamps. These are all ways of communicating that build walls between yourself and others. We also have communication deficits as a result of parents who lived through dark times. They over-parented so that their children did not experience the same horrors they did, and they had to work outside the home as opposed to inside (including during times of recession). These communication deficiencies may also be a reason why we do not show affection.

During your YUKATA&MATSURI performance, you wear yukata with your illustrations on them. In your ON-1 interview you said, “people who love yukatas and kimonos might disapprove of my artwork because there is a certain ‘way’ these things should be portrayed. However, as an artist, there is a specific message I want to convey and at times, I will use cultural artifacts to do so.” In what way is your usage of yukata and kimono unconventional?

They have never criticised my yukata, but I did hear an older woman say that “ShojonoTomo’s works are thought-provoking, but they don’t appreciate tradition,” about some kimono I had created for a design exhibition called Kimono Fusion held in Sweden between 2009-2011. This woman was a great lover of the Japanese kimono, but that doesn’t mean that she was rejecting my work. The exhibition organisers were insisting that I “create pieces that use antique kimonos”.

I, in response to their council, represented the children’s festival called Shichi-Go-San—long celebrated in Japan—as contemporary art through my own interpretation. I sewed blow-up dolls and swim rings meant for playing in water into the Shichi-Go-San kimonos, so I guess it was no surprise that it seemed as though I didn’t value tradition.

Long ago, children up until the age of seven were not considered human—they were treated as “children of the gods”. I chose to stick blow-up dolls on kimono in order to depict that. Unfortunately, it seems that there is no way to successfully communicate an explanation of this concept of mine. However, the subject matter that I wanted to share is rooted in folklore, so I have conveyed something about tradition on that point.

As explained above, there are ways to pass down traditions in Japan without modifying them. However, there have been changes in humanity and culture due to social environment and the harmful effects that have arisen. I’m an artist who conveys those changes and evils through the SKINSHIP BURNY concept. As with yukata, I’m creating images that satirise the present and the future, not the classical patterns that evolved from Japan’s unique traditions and talismans.

You’ve said you want to make it known you are an artist and not a fashion designer. Many consider fashion as “wearable art”—why is it important to you to make a distinction between the two?

I’m a contemporary artist but I do sometimes take commissions. When I produce a piece according to a client’s order and with their interest in mind, I think of myself as a “designer”. Consequently, the YUKATA&MATSURI project is the work of an artist, not a designer. I used the expression “wearable art” when I was making the T-shirts, but I think it is the job of a designer to construct with the wearer in mind. Neither one is superior to the other.

I thought of the phrase SKINSHIP BURNY in 2004. It’s really a wild story. And my weird alias—ShojonoTomo—is just as wild. “ShojonoTomo” is the girl inside of me—my inner child. But after a couple of years, I realised that my head had taken the voice of that inner child in the pits of my stomach and created SKINSHIP BURNY and ShojonoTomo. Was that a sign? A tiny cry wanting to be acknowledged? Unfortunately, I wasn’t aware of the mist that had fallen over my heart and that intuitive little voice. From now on I won’t ignore that visceral feeling and I will try to live my life chasing things that unsettle my soul.

Sadly, I had to postpone a solo exhibition because of ill-health in May 2018. My first aim is to get that exhibition back on track and then I will be showcasing some pieces domestically and internationally. Wish me luck!

SKINSHIP BURNY: Love me until you burn. The year is 20XX! Mankind has just averted El Niño, but there’s a new problem: the Glacier phenomenon. Children cannot bear the isolation. And in response to that loneliness, they have lowered their body temperatures to the point of freezing. Those who resist conversely develop an abnormal fever. Unable to find love with anyone, they are burned out by the high temperature. It is called LOVE SICK: mankind’s El Niño. The slogan for these children? “Love me until you burn”. Regardless of the risk of being burnt by their fever, your love demands that you hold them tight. They are awaiting your love.