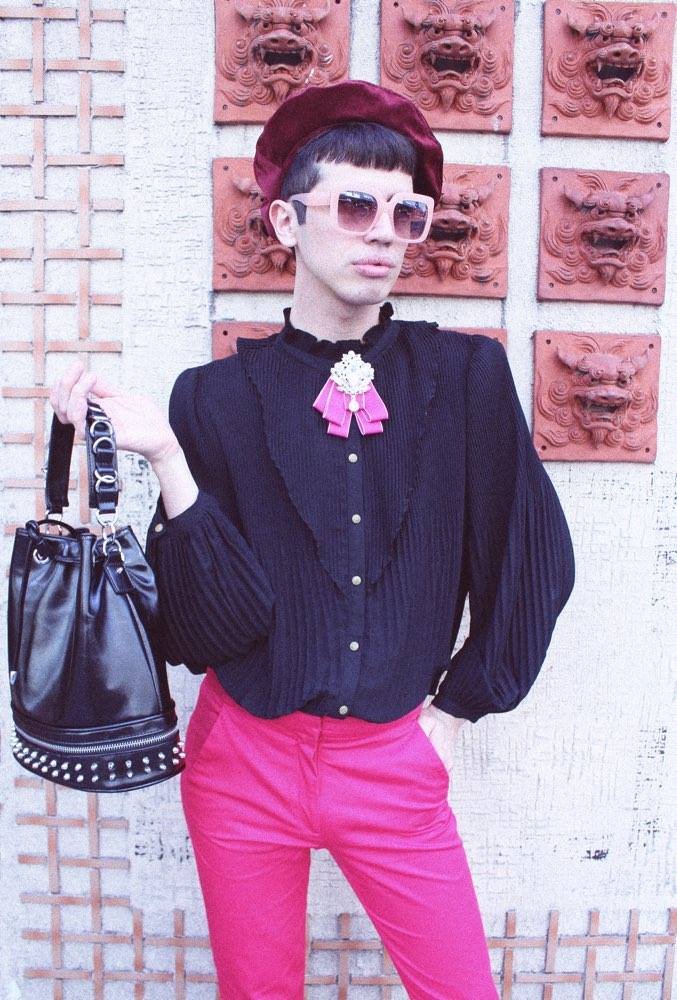 Bold and confident are words that come to mind when describing Argentinian designer Santiago Artemis. We met only briefly on a hot afternoon in Shibuya while he was on a whirlwind tour of Tokyo, and were lucky to catch him for a few snaps. Off the bat you can tell he is a designer—not only is his styling impeccable, but the clothes fit like a glove. “I think it was pretty natural,” he said when asked about how he got into fashion design. “Since the very beginning I was obsessed with fashion, clothes, girls, strong women such as Sailor Moon, Jem, etc.”

“An Artemis girl is daring, confident, she doesn’t want to blend in.”

His words are clearly reflected in his designs and models who represent the same “strong women”—the Artemis Girls as they are called. But who exactly is an Artemis Girl? He describes them as all kinds of women who share one thing in common: “They don’t want to look regular, they don’t want to look the same as everybody else, they want something extra, that extra something, that extra pizzazz. An Artemis girl is daring, confident, she doesn’t want to blend in.” And blending in is something that Santiago himself doesn’t do. His advice to anyone wanting to bring more of an Artemis Girl attitude to their wardrobe is “to be daring, to be different, to listen to your inner voices but most importantly to flood yourself with lots of information and knowledge about style”.

His style is tailored and elegant, more of a classic look than street style. Both his personal style and the clothes he designs look runway ready. But is there much of a separation between his street fashion and runway designs? “I think there is, but in my case, I don’t really dress like the world is asking me, therefore I live in my own bubble (style wise) but street style doesn’t resonate with me as much as having my own style and putting it on the streets.”

Not a bad thing if you ask me! But the point he wants to put across is that it’s way more important to do your own thing. His Instagram shows exactly what he means and the aesthetic is strong. “Learn how to pose, learn how to edit and know in the back of your mind that you can do whatever you want as long as it’s visually appealing”—and you too can up your Instagram game! Noted.

Throughout this issue we’ve been playing around with the idea of the runway and what makes it so coveted. Is it the show, the clothing, the models? As a designer Santiago has tons of experience in the process—from creating a collection from scratch to presenting it on the runway. Of course, the process is creative but there is so much more to it. From his perspective the most challenging part is putting the show all together. “It’s so stressful, and takes a lot of energy and loads of money, either you put the money yourself or you have an investor, but it’s really difficult and most stressful!” No matter how stressful it is, he still has his sights set high, with plans to showcase one of his collections in Tokyo. We have our fingers crossed for its success!

But we couldn’t just end it there! At The COMM we’re always looking to refine our wardrobe, so there was no way we were going to wrap up this feature without asking Santiago what his top five fashion must-haves were—a real wool black long coat, a romantic blouse, a nice hat, a pair of over-the-knee boots, and a padded shoulder blazer!