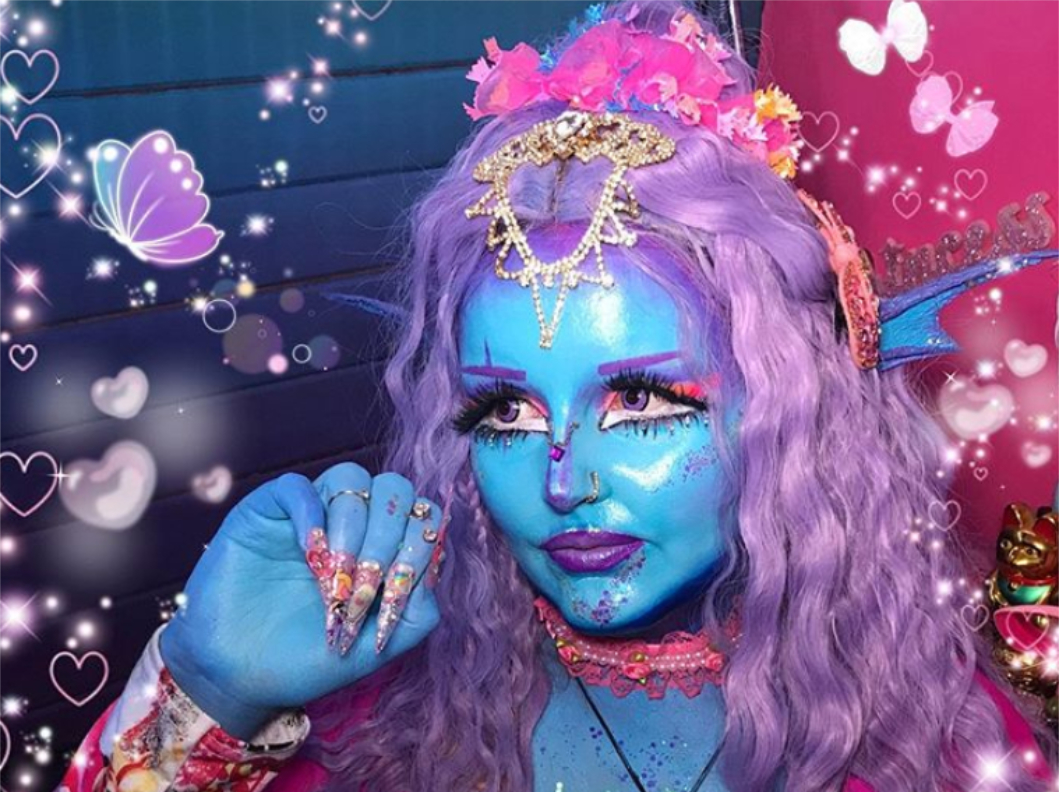 “I’ve been called a ‘freak’ my whole life. The blue skin makes people think I’m trying to look like an alien (which I’m not), but I actually really like aliens, so I’ll go with it!” Meet Youtuber, blue-skinned gyaru, nail artist and self-proclaimed “alien freak”, Lhouraii Li!

Lhouraii’s evolution from heavily tanned gyaru to ishoku-hada gyaru has been more than 10 years in the making. Before transitioning to full-time ishoku-hada, Lhouraii’s staple style would have been described as something akin to a Barbie doll. Now, she’s all “gyaru-meets-Mars”. She’s known for a unique mash-up of fantasy and manba-gyaru (a wilder, darker version of the usual gyaru style). Lhouraii makes her own horns, facial jewellery and elf ears. This blue obsessed Yorkshire mermaid is a one-of-a-kind within the online Japanese street fashion community.

“I think people see me with my blue skin and think
‘Well, wearing that hair clip I like doesn’t seem like
such a big deal now.’”

Lhouraii’s style hasn’t always been understood outside of the community. When she was younger, Lhouraii felt alienated. But this experience also encouraged her to live true to herself. “[My personal style] makes me feel like I exist…I think it’s important to dress up and make yourself feel nice even if you are stuck inside.” Luckily for Lhouraii Li, the online community was waiting with open arms and she soon found true acceptance on gyaru forums. On YouTube, Lhouraii has filmed gyaru style tutorials and has even created a virtual gyaru award ceremony. Her philosophy? “[N]o matter what you do and how you live—people will always judge you,” so dress however you want! 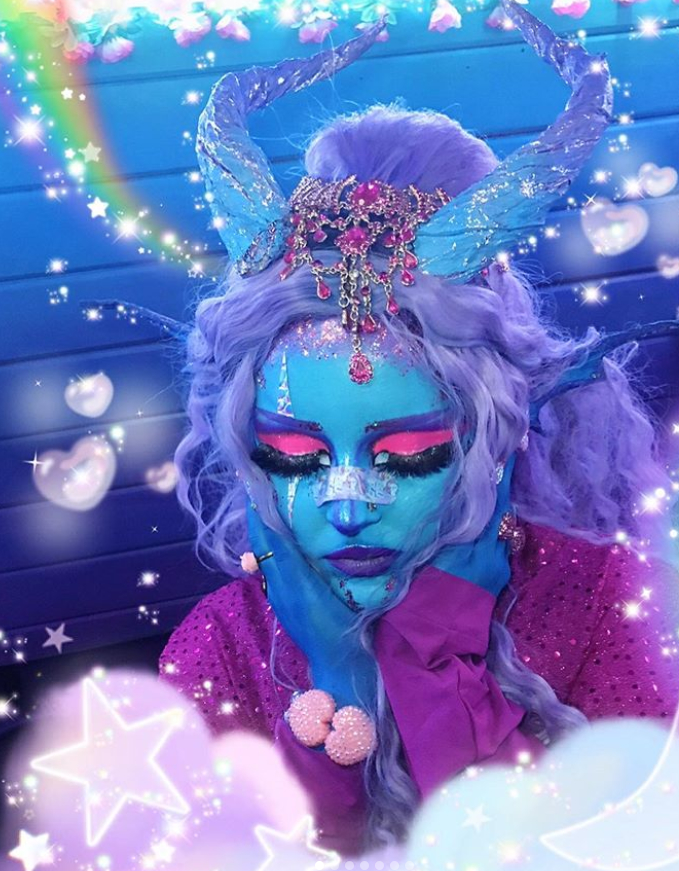 In 2008, Lhouraii began making her signature “wolverine-claw” acrylic nails. Many negative comments were thrown her way in real life so she never imagined that they’d be a hit online. Custom nail requests led to setting up a popular Etsy shop. Lhouraii draws inspiration from all aspects of her life to create her out-of-this-world nails. “I see a dress, flowers or an image that I like and save it to make nails inspired by it.”

Lhouraii’s also a huge trekkie and has filmed parodies of the show with her boyfriend on a drunken night or two. Star Trek, although not always peaceful, is a show about a humanitarian mission that involves space exploration and acceptance of life in whatever form it may come. It represents an ideal that resonates with Lhouraii Li—even if it doesn’t always seem attainable. “[An alien’s] first impression [of us] would probably be excitement, they’re second impression would maybe be deep sadness because of the self-destructive nature of humans,” Lhouraii explains. What else does she love about the series? “One of the main parts of Star Trek that I wish was real is the medical technology! They can just scan someone and find what’s wrong.” 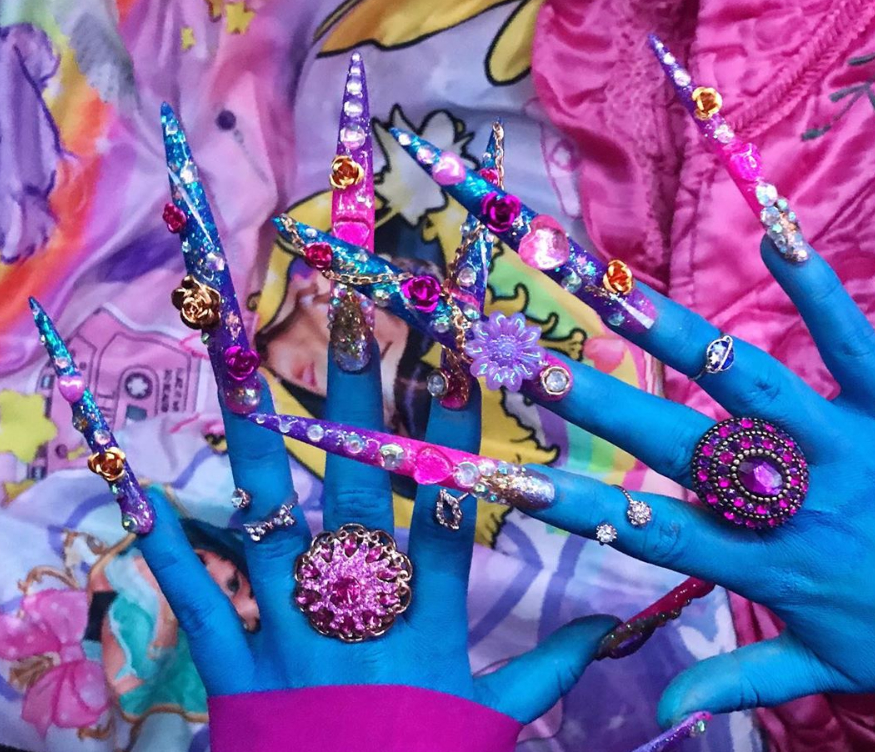 Living on a rainbow painted, glittery houseboat makes her life look adventurous and carefree but Lhouraii also suffers from agoraphobia (an extreme fear of being in open or crowded spaces). Talking openly about her debilitating anxiety disorder, Lhouraii has shared many of her struggles with her social media followers. “I stand outside a few times per week (and almost fall over because I’m not used to still ground, haha). I really love seeing the stars and the moon. I forget how big the sky is…”

Slowly, Lhouraii is getting better and her personal style is a major part of that. “[I]t…makes me feel like I exist,…I think it’s important to still dress up and make yourself feel nice even if you are stuck inside,” Lhouraii explains. So, when strangers think that Lhouraii paints her body and rocks cute pastel wigs for attention, they couldn’t be further from the truth! “I’m a very socially anxious/introverted person so I’m doing it DESPITE the attention!”

No one can predict the future, but that doesn’t stop us from trying. In 10 years time Lhouraii sees herself somewhere outside helping the planet. “My life goal is to keep improving my soul, and help others as much as I can… I think people see me with my blue skin and think ‘Well, wearing that hair clip I like doesn’t seem like such a big deal now. [The] biggest regret that people have on their deathbed is not living their life for themselves—I really hope I can inspire more people to live for themselves.” 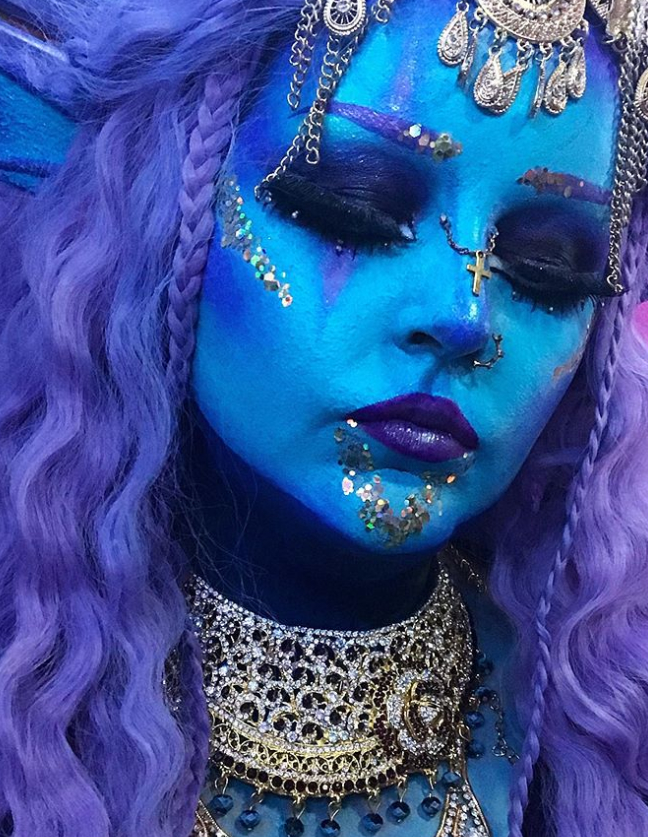