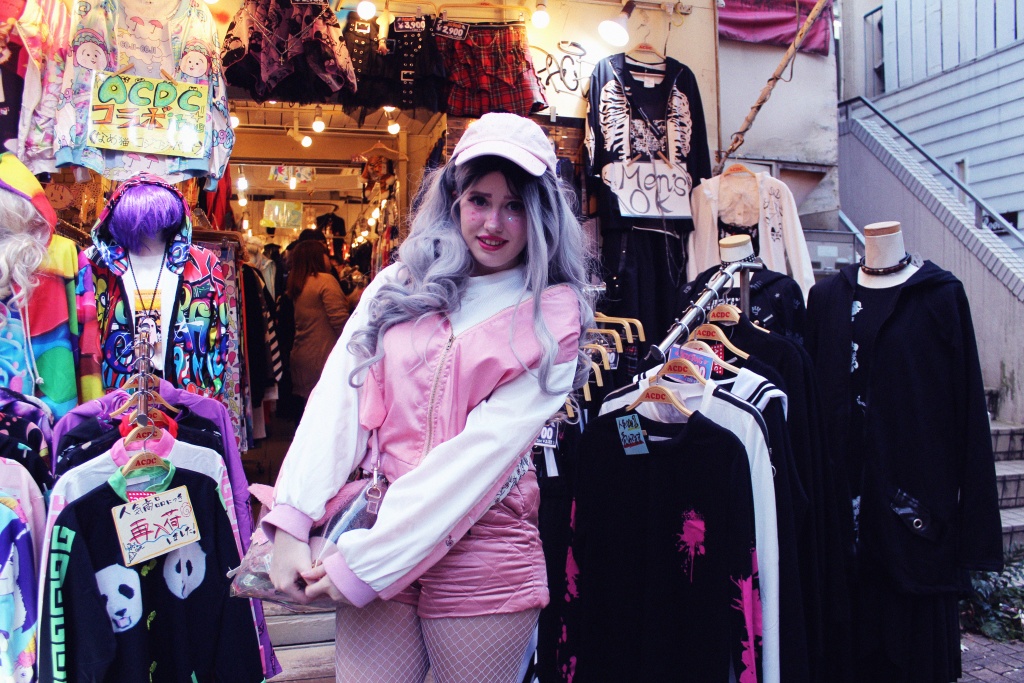 We spoke to Katie, a familiar face around Harajuku. She has a significant online presence already, but we wanted to find out more about what motivates her to be such an enthusiastic leader of Tokyo’s fashion community.

Her fashion, she says, is inspired by her diverse group of friends who all wear different styles. There are some models like Risa Nakamura from whom she draws inspiration, especially for her Larme-kei co-ords, but it was one of her good friends that introduced her to the fashion style in the first place. She doesn’t tend to stick to one style though. Just like the trends of the Tokyo streets, Katie’s fashion is very fluid: going from all out Lolita to a casual Larme co-ordinate. Although she doesn’t explicitly follow set trends, it’s hard to not draw inspiration when you’re surrounded by them all the time.

If people see you’re passionate about it,

that’s all that matters!

As for her outfits, there’s no key component that she includes in each one BUT she’s really into fishnets—for now, anyway! Other favourite pieces include big fluffy hats and coats which are perfect for winter but not so great for the really humid summers in Tokyo. The fluffier and more extravagant the better! Since her job is a typical  9-to-5, she doesn’t get the opportunity to dress in a way she wants during the week. Katie is a teacher so she spends the week running after kids—which can be really exhausting, but at the same time really rewarding. However, when the weekend comes, she makes sure to go all out to make up for it! It’s all about a balance of work and play: “work hard, play hard”, as the saying goes. After work, her journey home takes her through Harajuku and Shibuya so she usually uses that time to pick up a few bits for future outfits, maybe even for the coming weekend!

Katie regularly organises meet ups with fellow fashion lovers living and visiting Tokyo. She was inspired to bring together groups of people who, although dressed alternatively, never hung out together because their styles weren’t the same. She became tired of the cliques of gyaru, lolitas, and fairies and decided that it was better for everyone to enjoy dressing up together!

Outside of fashion, her go-to activities are playing with her hedgehog and watching Harry Potter. But sometimes during her downtime, she starts feels like she isn’t being productive enough and will edit a video for her YouTube channel. Living in Tokyo makes you feel like you have to work 24/7!

Her final words: if you are interested in fashion, do some research and try things out. It doesn’t matter if your outfit isn’t perfect as long as you’re having fun so don’t think of it as a competition. If people see you’re passionate about it, that’s all that matters!