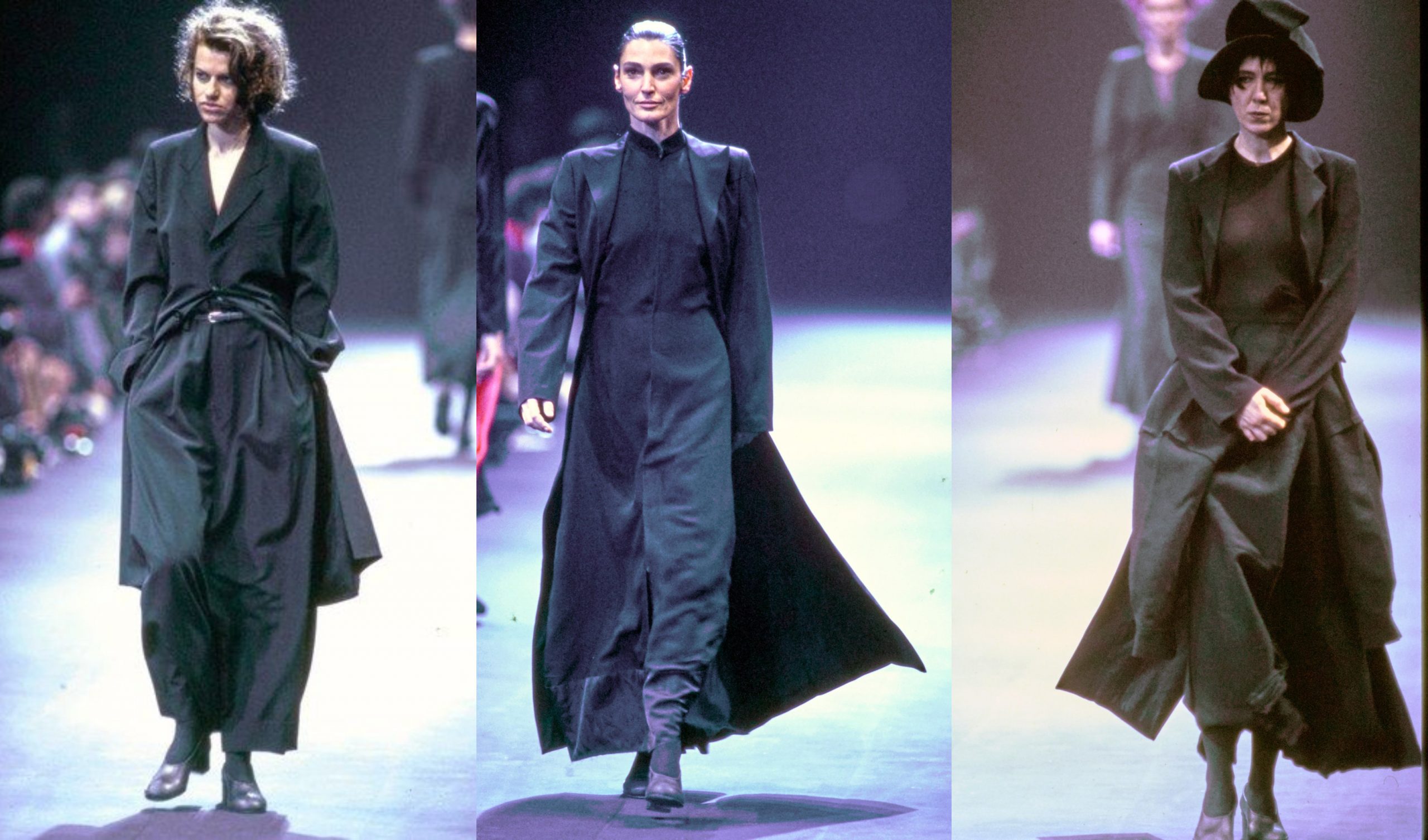 While the argument about the true origins of the kawaii aesthetic rages on, we can all agree that the 60s and 70s were a major moment for the style. But during the 1980s, a new subculture emerged in response to this feminine, cute, and polished aesthetic. Translated as “crow tribe”, Karasu-zoku was black, black and more black, and at the forefront of all that… black were designers like Yohji Yamamoto and Rei Kawakubo! In the street fashion world, the pendulum is always swinging from one subculture to the next. Dark versus light, subculture versus mainstream, minimalism versus extravagance—this back and forth is no better shown than in the anti-fashion movement of Karasu-zoku.

It was never Yamamoto and Kawakubo’s intention to start a movement though. Yohji Yamamoto once described black as, “modest and arrogant at the same time”. This attitude towards colour became the foundations for Karasu-zoku. Raised by his seamstress mother, it’s easy to see what inspired Yamamoto to start making clothes. Although inspired by the British Punk scene, the westernization of fashion in Japan displeased Yamamoto, and rather than designing doll-like outfits for clients at his mother’s shop, he sought to recreate Japan’s traditional masculine silhouettes for independent women. Putting women in men’s clothes protected them “from the cold or men’s prying eyes” according to the young Yamamoto. His collection, “Impact from the East” debuted in Paris and elated individualists who were sick of the status quo but riled up the shoulder pad enthusiasts of the 1980s.

Kawakubo was in the same boat with the critics. The Comme des Garçons designer completely demolished Europe’s fashion canons—and that was the point! She really enjoyed not being understood by the fashion industry. The “Destroy” collection debuted in the same city, the same year as Yamamoto. It showcased designs that cloaked the body to emphasize the space surrounding the wearer. Kawakubo’s deconstructed garments were devoid of the “ideal” silhouettes and luxurious fabrics that Paris Fashion Week was famed for. The frayed hems, devastated edges, and erratic sewing patterns, indicated her hostility towards the orthodoxy of western fashion. Emptiness in the fashion industry was the message Kawakubo wanted to convey to onlookers who were preoccupied with consumerism in Japan. But what about kawaii fashion? Where did it fit in all of this?

Women could escape into a fantasy world where there were no expectations or pressures.

The global student movement gave rise to punk in cities like London, while Tokyo welcomed kawaii fashion brands like Pink House and Milk. But, the once a fringe subculture rapidly transitioned into a mainstream style in the 1980s. Rose of Versailles, a shoujo manga about Marie Antoinette helped kawaii fashion gain popularity with its rococo style. The female body was draped in lace butterfly-sleeves, rainbow tones, and coral blush. Women could escape into a fantasy world where there were no expectations or pressures. Their personal pleasure was realised by utilizing capitalism and consumption of adorable characters.

The mainstream held no interest for the Karasu-zoku—particularly female followers of the style. More Japanese women were financially independent in the 1970s and 80s so the idea of opting to dress for oneself and not a romantic partner, who was most likely in search of a kawaii wife, spread like wildfire. American influence also helped to popularise the idea of a new kind of woman, one who could assert her power and personality in modest and comfortable clothes. However, it is important to remember that these clothes weren’t just women’s or men’s—they were gender neutral. “Bag lady chic” à la Yamamoto and Kawakubo stopped wearers from being sexualized.

The anti-fashion rebels of Karasu-zoku rejected form-fitted, pristine clothing. Genderless fashion—a novel idea then—was embraced and fortified by Yamamoto and Kawakubo who designed for people who didn’t care what others thought of them. It pushed against the over-saturation of kawaii and gave defiant, non-conformists a new subculture to belong to. Like birds of a feather, the “crows” flocked together.