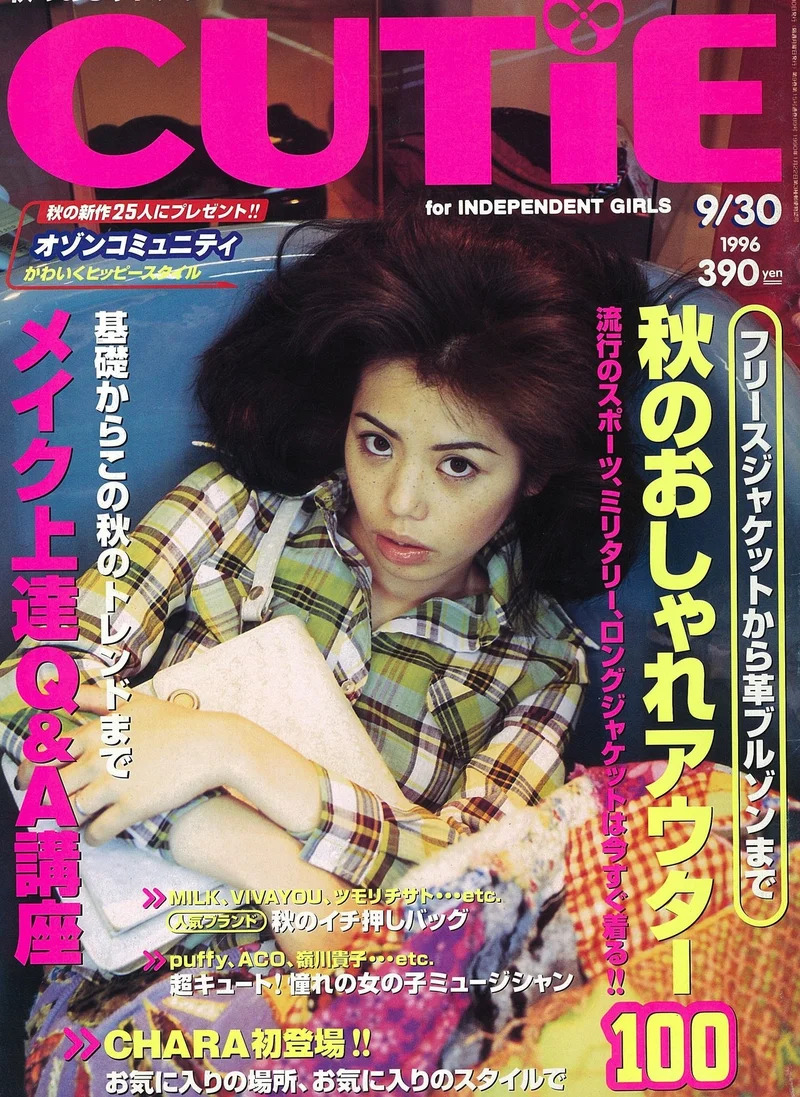 Magazines have long been integral to Japanese street fashion culture. In the past they set fashion trends and helped to establish fashion groups like gyaru or Lolita. Sometimes just seeing one person styling their clothes in a new way would spur a magazine to label it as a new fashion subculture! Readers saw what magazines testified as “in” and formed communities around these magazines. Although we’re now in a digital era, Harajuku got to where it is today because of these publications. Here’s a rundown on the most legendary street style magazines to come out of Japan!

CUTiE magazine launched in 1989. It marked the beginning of the Heisei era when the “Heisei brand boom” emerged. Professional models and luxury brands were out and instead readers looked forward to seeing photo shoots featuring girls just like themselves. CUTiE was a spin-off publication of Takarajima, a 1980s punk and new-wave youth culture magazine where you would see bands like The Clash and Sex Pistols featured alongside Vivienne Westwood. Inspired by i-D magazine, CUTiE ran a street snap section showcasing the extravagant looks of CUTiE readers. Girls who read CUTiE lived by a do-what-you-want mantra, and experimented with alternative styles. Their tagline, “For Independent Girls” emphasised the movement of pushing the boundaries in youth fashion. CUTiE was a magazine for a new breed of Harajuku girls! 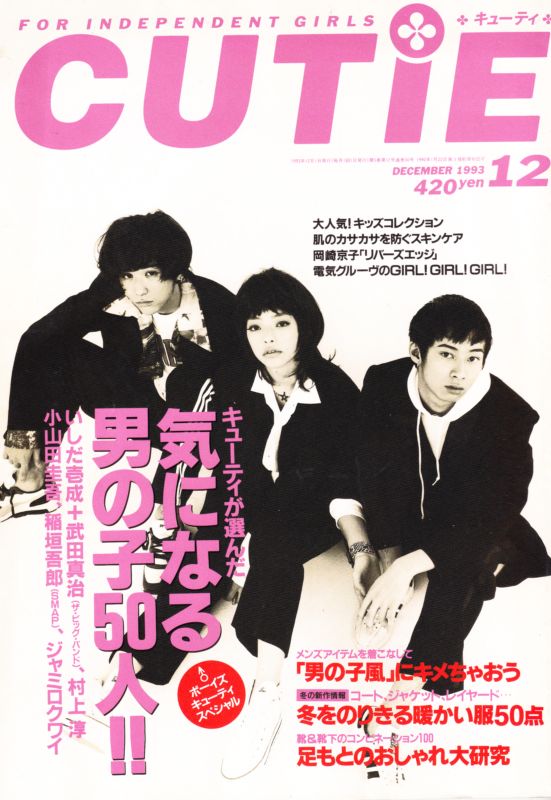 Anan magazine was a magazine ahead of its time. Anan profiled young Harajuku designers who we recognise as household names today. Rei Kawakubo of Comme des Garçons, Kaneko Isao and Milk’s Hitomi Okawa graced its pages long before their big breaks. In celebration of high culture, anan featured avant-garde illustrations, artistic nudes and theatre reviews in each issue. It seemed more like a collection of art that belonged in a museum, not on a newstand. Art director Seiichi Horiuchi and forward-thinking photographer Saburo Tatsuki were ahead of the game. Their editorials were progressive too. Models were directed to make freestyle, expressive movements because the magazine was “something strange, but cute”. Many of these models became “anan models”, meaning they exclusively modelled for anan. A small but significant practice that later influenced fashion magazines later down the line. They also featured mixed race models which was a first for its time. Even in the early days, anan’s forward-thinking earned women’s attention! 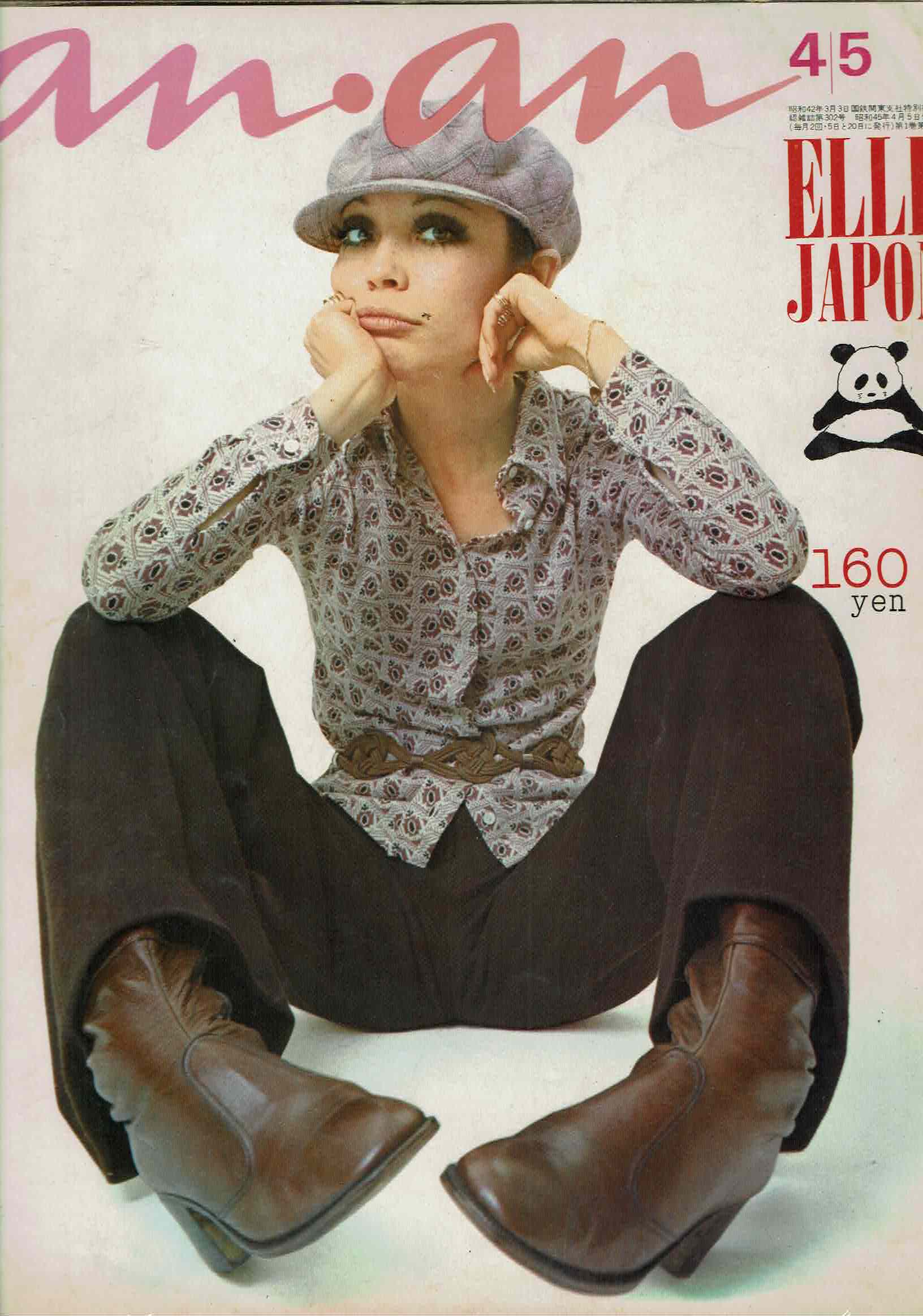 Starting in 1971, non-no magazine’s aim was to help their readers establish their self-identity. It was aimed at university students and early twenty-somethings hungry for fashion and culture information. Non-no gave young women practical cosmetics, hairstyling, beauty tips and how-to tricks. If you wanted to know more about new shoe brands or which lip colour would match your skin-tone, non-no was your go to source of information! They spotted and predicted fashion trends like nobodies’ business. How? Don’t know but it’s what kept us reading! There was even the social phenomenon of non-no and anan readers who travelled with the magazine as hand-luggage and became known as ‘annon girls’. 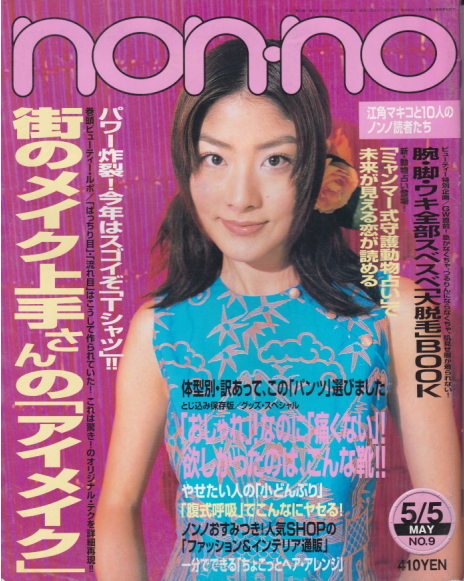 What made Zipper special was its ability to connect to their fashionable readers who wanted to create a style that was more than surface level. Like many of Japan’s street style magazines, Zippers’ street style snap section was a main key to its popularity. Girls combined second-hand clothes and handmade items in a creative way that deserved documentation! Many street-snapped girls went on to become regular models or “reader models” aka “pachi pachis”. Soon these same models were being featured on the magazine cover and had spreads dedicated to their style. Zipper’s models dared to wear unique styles but also managed to stay on trend. They were able to bring their own fashion sensibilities to already established trends like Decora, Viviko and Lolita. Zipper ceased publication in 2017 however it was announced they would release a quarterly issue of the magazine from March 2022. Even after twenty-three years the Zipper girls spirit is still strong! 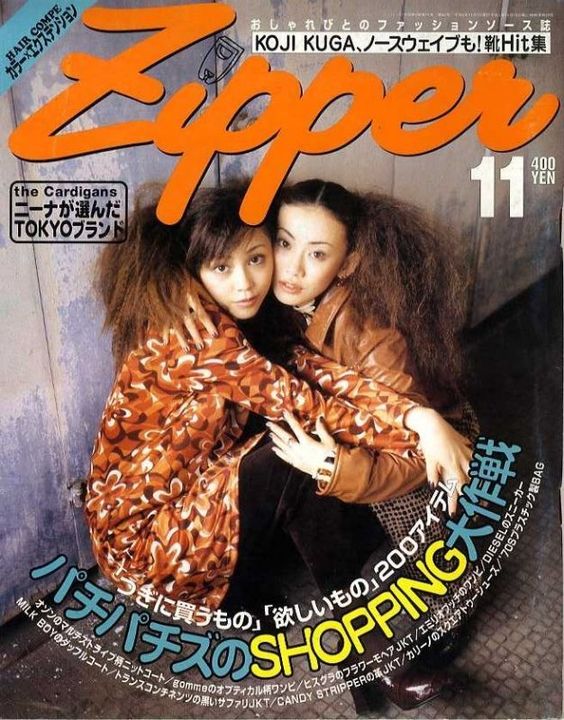 Launched in 1982 at the height of the kawaii revolution, Olive pushed a ‘Parisien image’ to high school girls who wanted to look like French girls. The fitting catchphrase “Magazine for Romantic Girls” showcased intellectual young girls who brought Olive to their school classroom. Most cover shoots were of young foreign models in girlish, sophisticated styles. Fascinatingly, Pink House, a brand associated with Olive, is considered the ‘spiritual predecessor’ to Lolita fashion. Olive readers were also interested in art, handmade items, interior design, literature and French cinema. An Olive girl would bake cookies wearing an Olive spread apron, no doubt. Without much money and information, Olive acted as an open door to fashion and city life in a society that wanted high school girls to ‘grow up’ quicker. Instead they rebelled. C’est la vie! 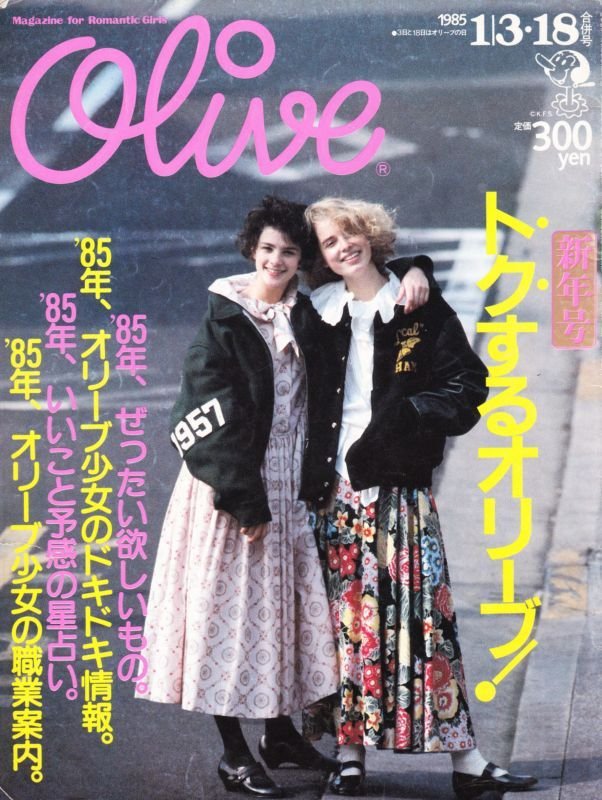 One of the most influential and recognisable Harajuku street snap magazines, FRUiTS magazine was fundamental to the worldwide recognition of Japanese street fashion. Photographer Shoichi Aoki began FRUiTS in 1997 to capture the spirit of Harajuku’s creative styles. Ceasing publication in 2017, but maintaining a digital presence, his magazine was the world’s guide to every kind of Japanese street fashion. Phaidon Press published a photobook of the top FRUiTS looks and thanks to its English translation it reached an international audience. This was how most non-Japanese people found out about FRUiTS. When you think about Harajuku fashion, FRUiTS will always be the first thing that comes to mind! 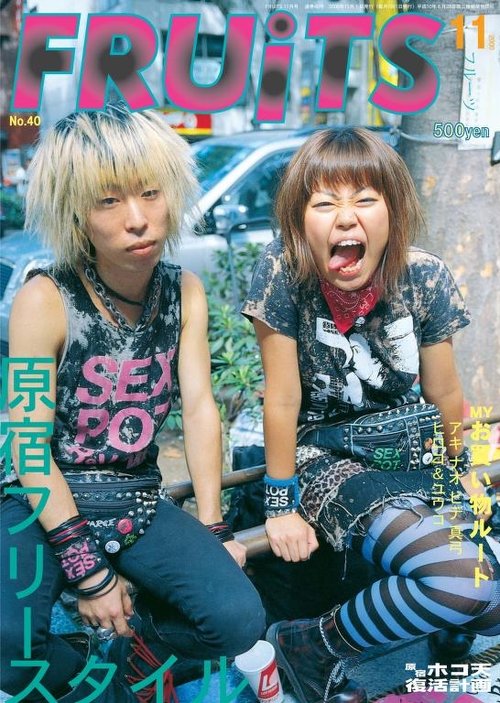 Synonymous with punk, gothic and Lolita street styles, KERA launched in 1998. It was among the first few magazines to feature a street style snap section which launched the careers of Akira, Misako Aoki, and Haruka Kurebayashi, who were all discovered on the street. Each street snap was accompanied by some text documenting their name, age, the brands they wore, and where they shopped. Another important thing to note were the smiley face and envelope symbols. These indicated whether you could write letters to them or say ‘Hi!’ next time you saw them on the street. It was a way to engage and foster a sense of community. Now KERA is online and well known internationally, and often features international communities. KERA also had a few spin-off magazines. The most well known beingGothic and Lolita Bible. Through translation and rerelease, it has spread Lolita fashion globally. 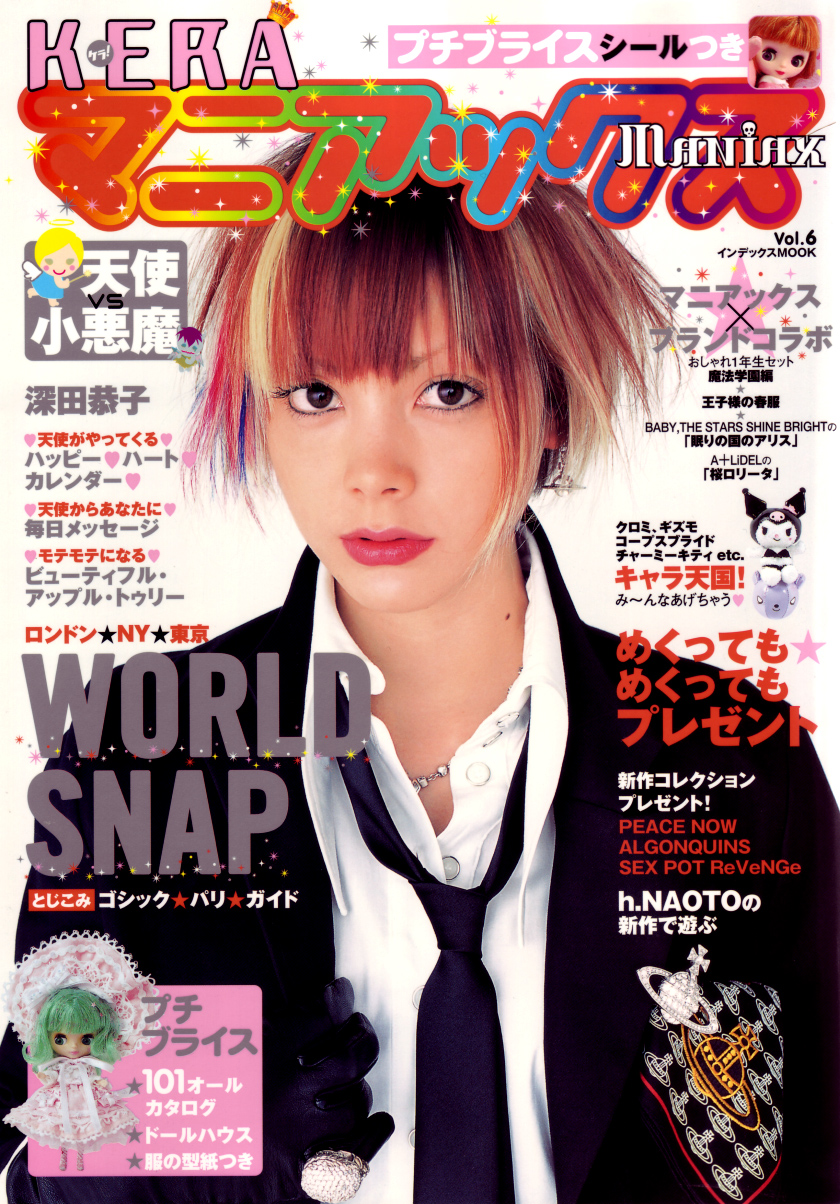 Most substyles have a magazine associated with their style, and for gyaru that was Egg! Egg magazine represented rebellion and was made for gyaru by gyaru. There was emphasis on featuring what gyaru wanted to see and read about and they definitely didn’t shy away from the bad girl stereotype. This magazine fully embraced “taboo” topics with each issue featuring spreads of sexy outfits and where to buy them, makeup tips, hairstyle how-tos, mobile phone DIY and even sex tips. Getting street snapped for Egg outside Shibuya 109 could mean ‘Egg girl’ stardom. Gyarus placed Egg magazine, alongside Shibuya 109, the tanning salon and Para Para dancing, as number 1! 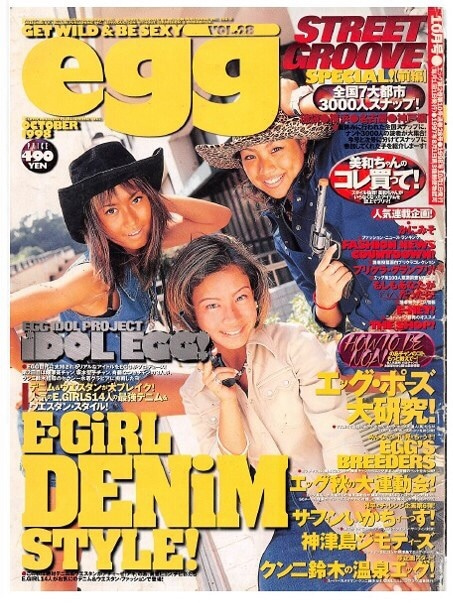 Image courtesy of tokyonadeshiko via Ameblo

So there you have it, a run-down of the most legendary Japanese street fashion magazines. Some have stood the test of time and some have gone digital, but there is no doubt they helped to cement Harajuku in the global consciousness.

Written by Ash
Featured image courtesy of shihomame via Note.