Amura, loose socks, choberigu, Para-Para dancing, egg, Cawaii!, gyaru circles, Britney Hamada—just some of the words that come to mind when you hear the word “gyaru”. But, then there’s also delinquent, child prostitution, materialism, consumerism and immorality. Emerging in the early 1990s with the kogal, the look peaked in the early 2000s and then again in the 2010s but much of the fundamental characteristics of gyaru (tanned skin, mini skirts, dyed hair) were cemented in the early years.

For many in the West, gyaru resemble the girl power movements of the Spice Girls and Britney Spears: women taking ownership of their sexuality. But the mantle of gyaru is a double-edged sword. These young women could wear fun-loving, resort wear pieces, take part in eurobeat line dances, and dictate fashion trends as celebrity shop staff in Shibuya 109, but they were also public property subject to ridicule.

The word “gyaru” had, since the 1980s, been used to refer to party girls. But it wasn’t until the kogal, in their designer uniforms, hiked up skirts, chapatsu (reddish chestnut) hair and loose socks that what we now know as gyaru came to be. The late 80s saw the rise of party culture in Shibuya. Extravagant, underground parties were organised by chiimaa: affluent university and high school students. Para-gyaru (kogal precursors) were the girlfriends of the chiimaa. They were given the name by fashion and lifestyle magazine JJ because they dressed like “everyday was paradise”. The kogal that would eventually begin the gyaru movement were the younger girls, the groupies that hung out around the chiimaa circles. Their story was one we’re all familiar with: rich, private school-educated teenage girls who wanted to take a walk on the wild side.

Rebellions of any kind involve the creation of in-group culture. Fashion is a big part of that because how you dress is a major signifier for individual and collective affiliation. The kogal was not the diehard rebel we think of when we hear the words “teenage rebellion” (that title is held by the British punks of the 1970s). The early kogal were from well-to-do families which allotted them a certain sense of security about their present and future, and that tempered much of the anxieties that typify youth rebellion. It’s probably better to describe their rebellion as casual. They teased rather than disrupted.

Gone were the sailor uniforms. In were blazers and
tartan skirts designed by the likes of Kansai Yamamoto.

The kogal rebelled by… wearing their school uniforms. Why? Because they were designer! Competition between private schools due to the declining birth rate saw the institutions coming up with all manner of marketing ploys. The designer brand uniform movement in the late 80s ushered in a reimagination of the Japanese school uniform. Gone were the sailor uniforms. In were blazers and tartan skirts designed by the likes of Kansai Yamamoto. Wearing your uniform became a mark of pride.

As harmless as the kogals appeared, they were the cause of a wave of moral panic. Nothing garners public attention better than the imminent destruction of society. It can be due to rampant satanism, violent lyrics or anarchism. Public fear, for the most part, is driven by mass media because outrage doesn’t just sell, it proliferates. And the response is even stronger when it comes to children—they are the future, after all. Children the world over are considered innocent, untainted by the evils of society and therefore wholeheartedly deserving of its protection. Girls in Japanese society represent vulnerability, purity and propriety, and that is supposed to be reflected in the manner and dress. Japanese ideals regarding girls require them to be small and delicate, docile and amiable, so their corruption is particularly dangerous.

The self-sexualised kogals, with their smooth tanned legs and casual disobedience of the rules, provided a real-time cautionary tale about moral decay amongst the youth. Something must have been going wrong in Japan for girls to be acting this way.

Japan is seen by Japanese and foreigners alike as a relatively crime-free, economically advanced country. Coinciding with the kogal and increasing anxiety about national identity resulting from the bubble collapse was the perception of an increase in crime. The actual reality was that crime had increased, but that was true only because of changes in the reporting and recording of crime. Media coverage engineered a collapsing society narrative and the result was the loss of public confidence in the criminal justice system. 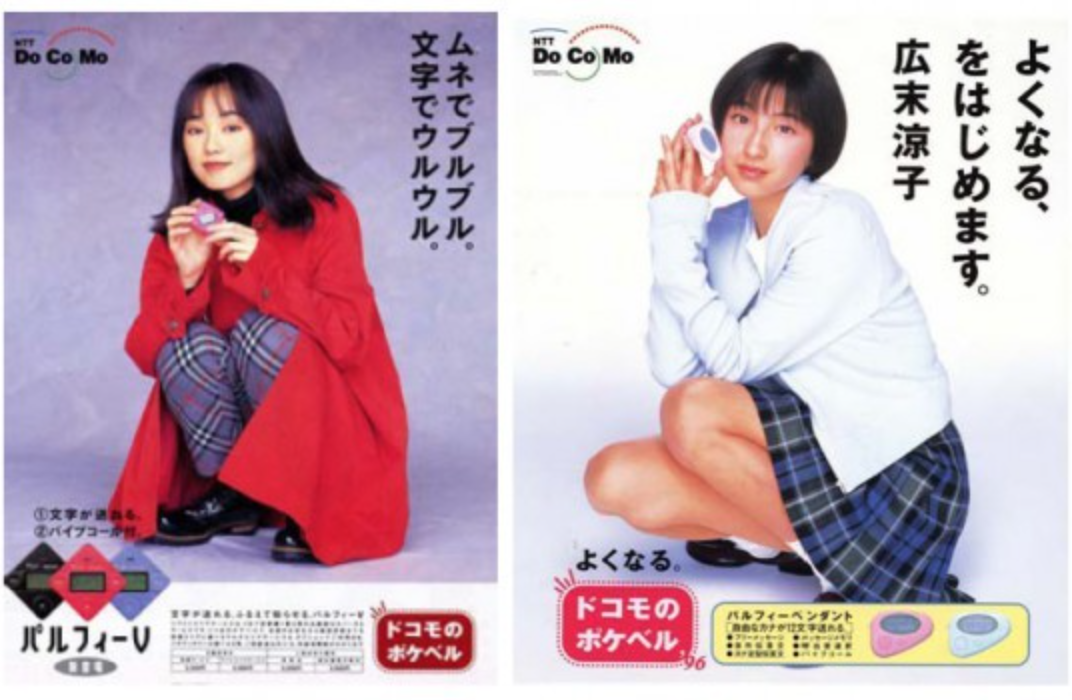 A big part of kogal culture was tech: pagers called pokeberu (pocket bells) allowed friends to communicate, while terekura “telephone clubs” served as telephone dating services used by men to arrange meetings with young girls. And it was the terekura that ended up providing the infrastructure for enjo kōsai (transactional dating) which most in the West would equate with having a sugar daddy. Make no mistake, the terekura were fronts for prositution, and middle-aged men did have sex with teenage girls thanks to them. However for most of the early kogal, these were much more innocent spaces: they played pranks by setting up fake dates, and had silly conversations. Others have even argued that enjo kōsai was actually an example of girls and women working and exploiting the system.

It’s interesting to see the shift in thought: a young girl showing her legs quickly becomes the procoscious sex kitten. It played right into Vladimir Nabokov’s Lolita fantasy. It’s true, girls can be mischievous—but so can boys. The association of kogal with sex created a fiction in which the teenage girls had all the power. The extensive media coverage gave it a salacious spin: Teenage girls are flocking to Shibuya for sex, debauchery, and designer bags at the expense of middle-aged salary men!

There were governmental crackdowns on enjo kōsai, and the kogal became mainstream thanks to J-Pop starlets like Namie Amuro and seminal magazines like egg. Did the kogal signal the beginning of the end for Japanese society? No. Japan is not a cesspool of moral bankruptcy and crime. In fact, it still feels very safe for most foreigners. The early days of kogal was just a bunch of rich kids flirting with disobedience and having fun. Subsequent gyaru have done the same albeit in a way more extreme fashion—but isn’t that what kids do?