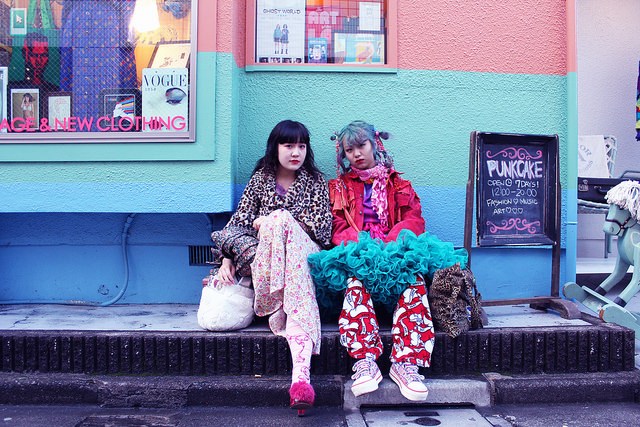 There was FRUiTS magazine, and then KERA, and now… there’s FANATIC.

A new breed of print publication from the streets of Tokyo has arrived! Curated by students and graduates of Bunka Fashion College, the magazine is their answer to social media: the thing that took the fashion off the street and onto online platforms. Taking on a huge project such as a magazine is no easy feat—but they always produce amazingly creative content. We asked them some questions to find out more about the magazine and the people behind it.

People from overseas probably don’t know much about FANATIC, so could you please introduce your members?

Please explain the magazine’s concept. What is the meaning of FANATIC? Does it have any particular meaning?

FANATIC: a diehard, avid fan. We aim to create spaces or environments in which people can express themselves. FANATIC comes out of our desire for people to love themselves and be their own fanatic.

Your magazine evokes a feeling of nostalgia and feels very handmade—making it more personal. Is this how you wanted it to come across?

Nostalgia is originality, and true originality becomes nostalgia. We are not just here to publish nostalgia. We would like FANATIC to be a place of self-expression for many people. And we hope that readers will become cognisant of a “nostalgia” that makes them remember forgotten or abandoned paths and dreams—by making new discoveries.

What are your influences?

We are both influenced by different things but, as a magazine, we are mainly influenced by 90s and 00s magazines. Our approach is to publish a magazine the way it ought to be published—with no advertisements, and by relentlessly pursuing what we want to express.

Why are you printing a magazine when everyone has gone digital, or are doing both?

We often read books at the library to learn about the past. We are committed to creating a print that will become a historical artefact in the future. We want to inherit the virtues of analogue (the tangibility of print) from the past and take them on into the future. We are not just a “magazine”. It feels as if, with print, we are giving concrete form to the soul.

What do you think is the future of magazines? Or of Tokyo street fashion?

To be honest, the magazines that feature general information and advertising are deservedly on the internet. Print magazines are limited by the speed of production. And so, considering the drawbacks of print, we think that having something special we want to communicate is important. Tokyo street fashion is a developing business that targets tourists. We honestly don’t know what will happen. We, personally, want to champion fashion that combines underground fashion with current trends.

How fashion is perceived is always evolving—how do you think your 90s-style fashion will be perceived in the future?

It is not just about 90s-style fashion. Generally, people do not really pay attention to fashion revivals. However, the encounters we have with different eras and people changes our way of living, emotionally. First one person, then another, and another, and so it goes. That is a great thing because that also becomes a part of the process of reviving fashion.