Hello and welcome to the very first issue of The Comm! My name is Choom and I am the Editor of this online magazine.

What is The Comm?

The Comm is the community: specifically the community of alternative fashion lovers. We wear fashion inspired by the styles found on the streets of Japan and enjoy sharing our passion for fashion with people all around the world.

“The Comm” magazine is a showcase of the community living both in and out of Japan which aims to bring everyone together in one online fashion hub. I operate the magazine directly from Tokyo, Japan, so you know you’ll be getting up-to-date information, right from the source. As a ShopGirl at the legendary long running clothing boutique 6%DOKIDOKI, I also had an insider’s perspective of Harajuku, an area considered to be at the forefront of the thriving fashion scene, and undoubtedly the most famous Japanese fashion district.

What can you expect?

Each issue will introduce you to members of the community—not just fashion-wise—but also an insight into who they are. The community is full of people of different backgrounds and I want to represent everyone as an individual part of this world-wide collective.

Whoever you are and whatever you do in this community, I want to represent you!

The articles will initially be published in English, Japanese, Italian, and French to be accessible to wider audiences but I hope to eventually publish in as many languages as possible!

An important note: throughout this magazine we will be using the umbrella term “Street Fashion” when describing the fashion as worn by the community. Some of you may ask why not just use the common term “Harajuku Fashion”? The word “Harajuku” conjures up an image of people in brightly-coloured Decora fashion, or tanned women wearing Gyaru-style clothing. This image of Japan’s subculture fashion was perhaps true of the 90s and early 2000s when the subculture began to garner worldwide attention thanks to publications such as FRUiTS magazine, however the styles have evolved since then. As with any fashion trend, new styles appear, evolve, and disappear: thus the Harajuku style as made famous during that era, and arguably still recognised as “Harajuku fashion,” has moved on. Yes, Harajuku is the most famous area—but there are other parts of Tokyo and outside of Tokyo that hold their own. So we feel that using the term “Street Fashion” is a better, more all-encompassing term. 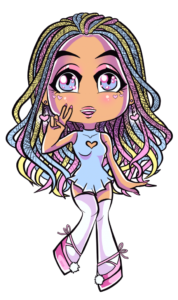 e bit about me!

As I already mentioned, my name is Choom and I was a ShopGirl at 6%DOKIDOKI. This means I had an insider’s insight into the industry having worked at the shop from 2015-2016 and then returning to work there once again from October 2017. Being in the centre of Harajuku opens up your eyes to the real, current state of the fashion scene.

You may have seen me floating around on your Instagram explore feed too! I’m an Instagram addict and I regularly post outfit shots and snaps of my daily life in Tokyo. I occasionally model and get involved with creative projects, but my main creative focus is The Comm!

I also studied Japanese at university—meaning I speak the language and also have a better understanding of the history and culture of Japan. I believe that direct communication with the participants of a subculture is absolutely integral so I talk to those in the Japanese community to hear their opinions and learn from them.

The Comm magazine is produced by people in the community, for the community, and those who want to know more about our global community! It’s time to get an insider’s view into The Comm!

If you have any questions or would like to get involved with The Comm, please email:
contactthecomm@gmail.com